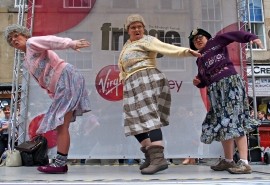 The Dancing Grannies are well known for their quirky comedic dance routines. They can perform for any event with a selection of dance routines ranging from Bhangra to African. Routine slots vary, to be discussed with client. Popular due to huge social media exposure.
: 0789462XXXX Click here to reveal
full number

When contacting this member, please state that you are viewing their Entertainers Worldwide profile.
Request a Quote
Share this Page:
Profile Views: 736
Report this profile


Their comedic dance routines have the surprise factor with any audience, totally unexpected.Whether it be a huge event or a smaller affair, a wedding or any celebration, the grannies can absolutely guarantee that the crowds or guests will be enthralled by their outrageous routines. They can turn up as a surprise for your event, launching into a series of routines. Imagine 3 old ladies dancing to high intensity Bhangra and African tunes, Beyonce Single Ladies, or Christina’s ‘Candy Man’. Can’t be missed.

The Dancing Grannies have become one of the UK’s quirkiest acts since a video of them performing at a carnival went viral back in the summer of 2014, numerous viral videos have surfaced since then reaching world- wide views in the region of 350 million. Since becoming viral sensations their popularity has soared especially with the Asian community due to their fantastic Bhangra style moves.
Their comedic dance routines ranging from Bhangra, African, Spanish hip hop etc were a huge hit at the Edinburgh festival back in 2015, it was here they were spotted by the Bahrain international circui ... t and asked to perform for the 2017 Formula 1 Grand Prix, they even managed to rub shoulders with the No 1 racing star Lewis Hamilton. September 2017 saw them performing in New York with a brief interview on Good Morning America.
It doesn’t end there, they have also performed with Peter Andre at Grand Central station Birmingham back in 2016 and UK’s leading vision specialist chain Specsavers have continued to book them for numerous store events nationally after a one-off event saw the store in question receive record sales and a viral video due to the huge crowds that gathered.
The grannies have also been busy performing for festivals throughout the UK such as Big Johns Mela, Morcambe Festival and Lichfield food festival. They have kept the crowds entertained at Award Ceremonies, whether it be meet and greet or performing a routine.

Dancing Grannies - Other Dance Performer - Dudley, West Midlands Event Location: Wolverhampton Event Type: Store Launch 2nd February 2016
Days on from the launch day I had other neighbouring businesses telling me also how they had an increase in sales, I had members of head office talking on how it was one of the best launches they had seen. The video of the grannies dancing outside our store went viral to the point within a few days we had hit over a quarter of a million views on Facebook. The grannies were so helpful and entertaining, that I can’t thank them enough and look forward to working with them again.
Reviewed by: Hardip Bahia

Fizzog Productions are the brainchild behind the Dancing Grannies, 18 years in the business of theatre entertainment has seen them win awards for their sell out theatre shows and contribution to the arts. Successful touring shows at the Edinburgh Festival. Performing as the grannies internationally as well as nationally. Street theatre specialists.

All members are CRB cleared
Public Liability for 5,000,000