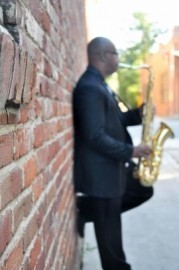 Active with " The Talking Sax" and Jazz Hammond Organ.
Request a Quote
Share this Page:
Profile Views: 447
Report this profile


Bio:
Eugene “With the Talking Sax” Peebles is one of the most accomplis
Eugene Peebles
Eugene “With the Talking Sax” Peebles is one of the most accomplished musical talents currently available to perform at any event or function in the St. Louis area music scene. The “Talking Sax” produces a captivating sound on the tenor saxophone which showcases his unique combination of passion, talent and ability to entertain no matter the style of music.
The “Talking Sax” is able to command the stage front and center as well as enhance any event with background music. Peebles cus ... tomizes his set lists for each occasion. He draws from a wide range of selections from his extensive repertoire of contemporary or classical jazz, R&B, gospel, oldies but goodies and just about any variety of popular music selections.
The “Talking Sax” is a classically trained musician who studied music from an early age. Eugene’s musical career began following a horrific bicycle accident when he was ten years old. His family drew upon their faith and belief in God to heal Eugene. His family’s prayers were answered when he emerged from a coma after ten days. Eugene was encouraged to recover with the added motivation of his father’s promise to provide him with an organ after he was released from the hospital. Once out of the hospital and blessed with the gift from his father, Eugene dedicated himself to music