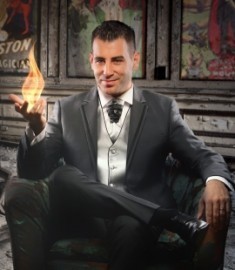 George Arkomanis (Tristan) is a contemporary artist who expresses and he is expressed
through the international language of art, serving the needs of a deepest reflective mood.
Through high-standard innovative and impressive magic & music works, he offers his
audience, quality - sophisticated entertainment. His work is characterized by uniqueness,
creativity, professional, artistic and aesthetic consistency, and that is why he is perceived
as one of the most important and popular Greek artists!
With countless distinctions and dithyrambic reviews, he has been awarded
as a composer a ... nd as a magician at festivals and competitions.

Award-winning artist George Arkomanis (Tristan) is one of the
most distinguished and talented people, in the field of art & entertainment.
His unique capacity as a magician, composer and conductor, has made the legendary
magician Michael Ammar, attribute to him the nickname “The Maestro Magician”.
He was born in Athens and from a very young age he was
in contact with arts, growing in a cultural home - open to many artists.
He started early with his education as a musician with Jack Rogers (classical guitar),
while at the same time he made his first self-taught steps in the wor ... ld of magic.
Then, he studied the Greek folk and eclectic music -in theory and in practice- with
the help of important artists of this kind (Christos Konstantinou, Nikos Tatasopoulos,
Ilias Lepeniotis, Kostas Vamvoukos and others) and from 1998 he started his professional path,
as a composer, arranger and bouzouki soloist. At the same time he attended piano and theory lessons
with Tasos Xirakis and then harmony, morphology, music analysis and singing with Grigoris Sourmaidis,
as well as jazz harmony and orchestration with Nikos Kotaras.
He studied “Special Harmony” with Philipos Hiou (Orpheus Conservatory),
“Special Counterpoint”, “Fugue”, “Composition” with Nikos Kariotis (National Music Academy) and
“Conducting” with Rafail Pilarinos (LCM, University Of West London).
Furthermore, he is the first Greek who has received the title “FLCM”.
He has taken part in conferences, seminars, workshops and master classes (magic, music,
performance, kinaesthetic, philosophy, music therapy, psychology etc.) of distinguished
people (Theodore Antoniou, Kevin James, John Howard, Jeff McBride, Spyros Sakkas,
Dirk Losander, George Minas, Lee Alex, Michael Vincent and many others).
As a Magician he started his professional career in 2007, co-founding the well-known
artistic duo “Arko Magic”, which took part as a finalist in the competition TV show
“Greece Got Talent”, getting from judges and audience, unprecedented impressions!
Since then, he has made plenty of appearances in top theatres, on TV & radio shows,
hotels, concert halls, restaurants, night clubs, casinos, event rooms, homes etc.
(Hilton Hotel, MTV, Grand Hyatt, National Geographic, National Opera and others).
Also, he has undertaken the promotion, presentation and advertisement of several products,
creating innovative “magic” ideas for the most prestigious companies
(Coca Cola, La Prairie, Wella, HP and more).
In 2017, the documentary “Talent” of Alexandros Skouras, on Tristan’s
(G. Arkomanis) life and work, was screened on the national television.
His amazing shows are a unique spectacle, where magic, music, speech and movement
blend together and compose a new - exciting area of expression and meaning.
Through impressive illusions, brilliant mind games, virtuosic sleight of hand
demonstrations & original music, Tristan immerses spectators into a world,
full of mystery, suspense, humor and feeling!
(Tristan Magic Show, Shadows In The Dust, Magic Music, One Magic Show,
Room Of Mysteries, Metaphysical Magic Show, Man Of Miracles etc.).
He has taught in various art & culture halls, academic institutions etc.
(Centre Of Classical & Contemporary Music, International Brotherhood Of Magicians,
Thoukidideios Cultural Organization, Greek Academy Of Magicians etc.).
He has also written articles, speeches, interviews, essays and poems of general content,
but mainly about arts, society, supernatural, life etc.
Many of those, have been published in newspapers and magazines
(Ta Nea, Artefake, Magician, Ogdoo etc.).
He is considered -maybe- the only one worldwide, who is involved especially with music
in the art of magic and he has given seminars, master classes and lectures about it
(Music In The Art Of Magic, Magic Music, Music & Performing Arts etc.).
He has composed original music for movies, documentaries, TV shows,
theater, advertisements, performances and more
(Magic, Children Of Internment, Edgar Allan Poe, Almare, Cube, Al The Old Robot,
Mirror Forrest, Marble Thoughts, Demon Of Logic and many others).
He has brought out five music albums (Giati M’ Agapises 2011, Rainy Night 2013,
Fake Truths 2014, Confessions 2015, Music Gallery 2016), one DVD (Shadows In
The Dust 2016), as well as other music works, accompanying album of other artists
(Martero - Back To The Future, ASMA - At Tonal etc.).
He is a member, seminar coordinator and music director of the International
Brotherhood Of Magicians (I.B.M.). Also, he is a member of the Greek Academy
Of Magicians, the International Magicians Society (I.M.S.), the Independent Music
Development Ring (ASMA) and the Las Vegas Magic & Mystery School.
He offers with his great social contribution -unselfishly- his magic at schools,
institutions, families and other people that belong to susceptible groups,
as well as in organizations fighting for the care and help of stray animals.
George Arkomanis (Tristan) is a contemporary artist who expresses and he is expressed
through the international language of art, serving the needs of a deepest reflective mood.
Through high-standard innovative and impressive magic & music works, he offers his
audience, quality - sophisticated entertainment. His work is characterized by uniqueness,
creativity, professional, artistic and aesthetic consistency, and that is why he is perceived
as one of the most important and popular Greek artists!
With countless distinctions and dithyrambic reviews, he has been awarded
as a composer and as a magician at festivals and competitions. 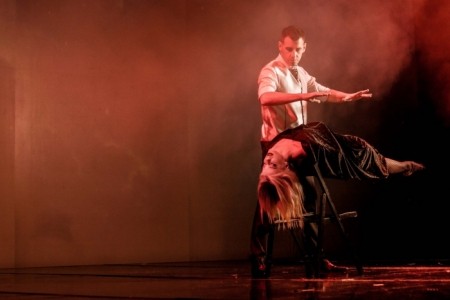 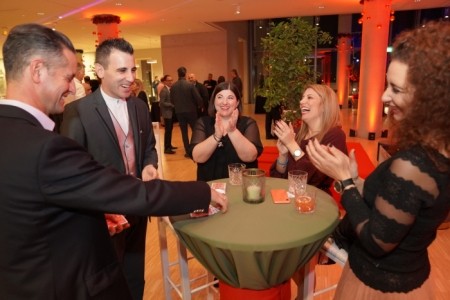 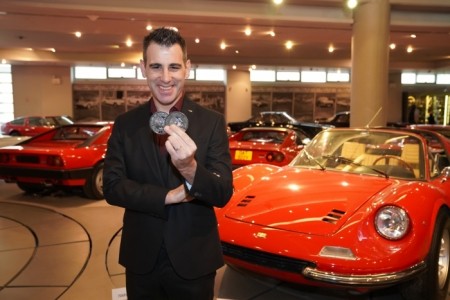 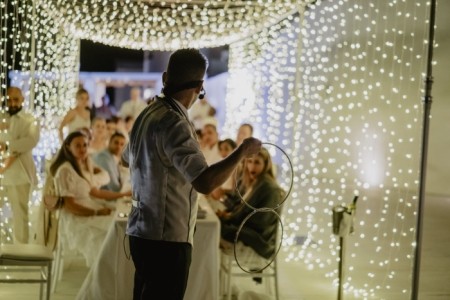 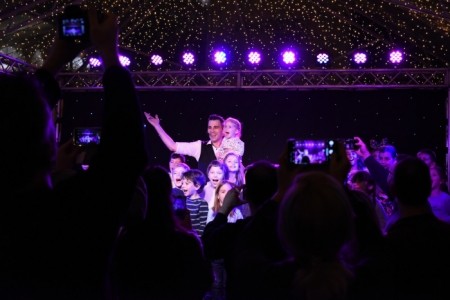 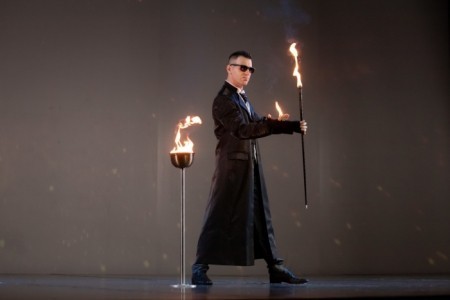 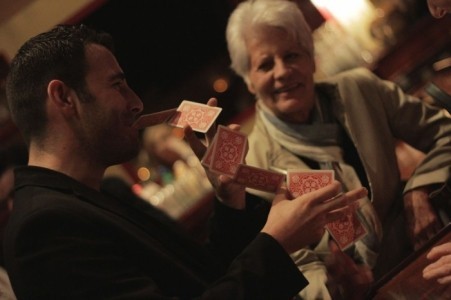 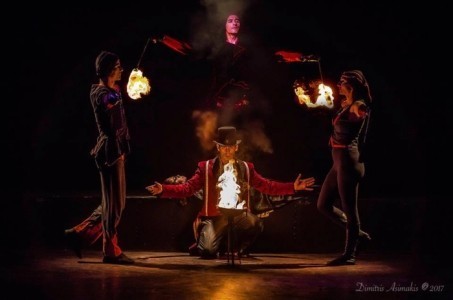 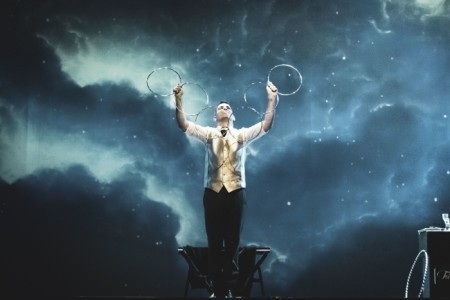 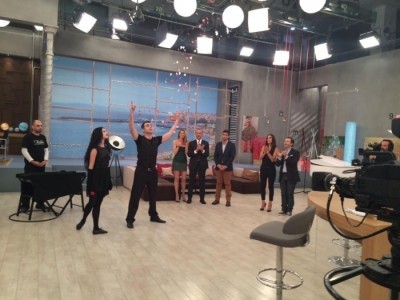 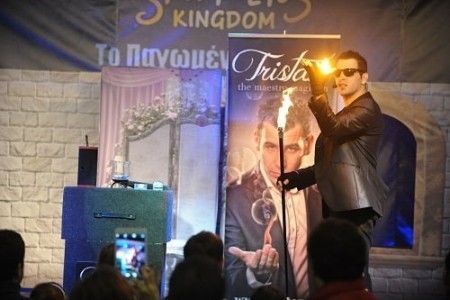 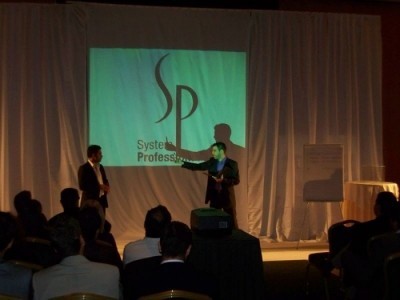 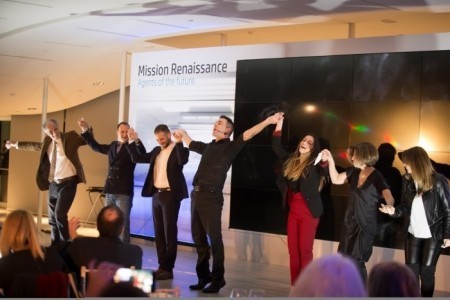 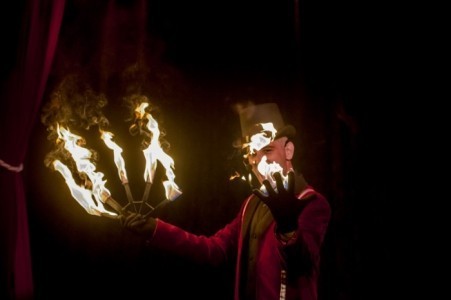 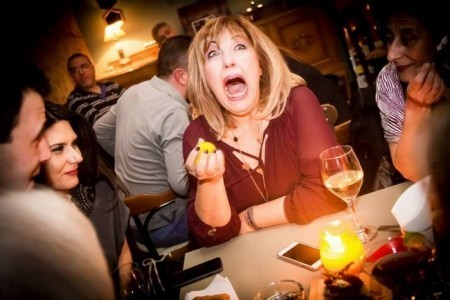