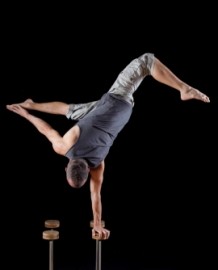 A circus artist from england, Andy was a physically active child, at the age of twelve he began breakdancing. Later he developed his abilities in movement to include parkour and free running where he gain most of acrobatic skills. Through training with performance enthusiasts he was introduced to the circus arts which lead to discovering his passion in hand to hand.
He followed his passion all the way to Paris, enrolling at Acadame Fratellini an established and well respected school for performers. Throughout his there year apprenticeship he had the privilege to work with various directors, ... performing with numerous companies, helping him evolve and refine his artistic craft.
After graduating he expanded his skills to include Aerial Straps and Hand-Balancing and now works as a free-lance artist.