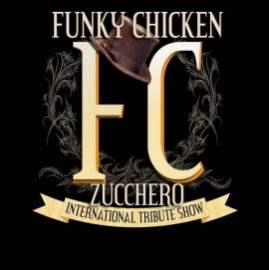 Since 2004 the band have performed on over 1500 stages all around Italy, and through Europe. The tracklist goes from wonderful and poetic ballads through the heaviest tunes. A big live show that will amaze and rock you!
Request a Quote
Share this Page:
Report this profile

The band BASTA UN PO' DI ZUCCHERO band was officially founded in August 2004 and used to play, the tracks Zucchero performed in the LIVE AT THE KREMLIN concert, and many other songs of the Italian artist; The band was unique and particular because during the show they used to play videos on a screen for each song they played.
At that time, that was an amazing innovation for a tribute band.
In 2008 after the very beggining of its career that started in a little pub in Modena called "Vox", the band has been nominated by Zucchero himself the best tribute act to his music.
Since then the ban ... d has been seducing audience and promoters for its professionality and congeniality.
In 2013 DELFO, the front- man and founder of the band, (well known for his great vocal and physical similarity to ZUCCHERO FORNACIARI ) changed the name of the band into FUNKY CHICKEN.
Since 2004 the band have performed on over 1500 stages all around Italy, and through Europe.
The tracklist includes wonderfull and poetic songs such as DIAMANTE and COSÌ CELESTE and goes through the most popular ones such as BAILA, IL MARE IMPETUOSO, OVERDOSE D'AMORE..
A big live show that will amaze and rock you!!
“IN BLUES WE TRUST, BLUES WILL NEVER DIE!“
(“ZUCCHERO“ ADELMO FORNACIARI)

Request a Quote
Share this Page:
Click here to view more Tribute Bands in Italy
Browse all Entertainment Hire options!
Looking for a different type of entertainment? Search NowContact Us