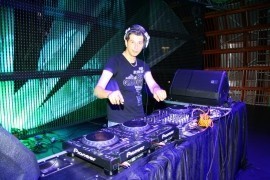 With a desire for music and technology in this century, to get a job in electronic music was not too complicated for Bostan. After finishing high school, he started working at Street Club. Gathering an enormous knowledge of the recent dance music, he was offered to become a DJ at famous parties in some of the best Turkish entertained cities, Antalya, Istanbul, Bodrum, and Kemer. Since 1998, he began accepting most of the offers, and started his DJ career. Afterwards he moved to The Netherlands and lived there 3 years. He performed in many clubs and parties as performance dj mostly in the citie ... s Amsterdam, Rotterdam and Utrecht in The Netherlands. As an International DJ he performed in different countries as well. He was resident in Rixos The Palm Dubai for 2 years. In the year 2013 he started to produce his own music and released his tracks officialy on Beatport, Itunes, Junodownload and on so many of other digital music stores. As you see, Bostan has been following his passion for music and sharpen his talents for more than 15 years. He has mastered the art of DJing and proven his remixing abilities to some of the dance music industry’s. Currently he keeps releasing his new tracks.