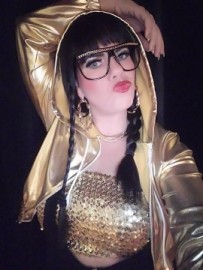 (no reviews)5.0
Country: Canada
Based In: Canada/Toronto, Ontario
Performs: Worldwide
From: £400

DJEZii an International Female DJ from Toronto Canada. Playing all sounds from all Era's. Has traveled to 6 different countries and learned all forms of cultural music.
Request a Quote
Share this Page:
Profile Views: 329
Report this profile

My DJ sets are based on what the clientele asks for. I work off a few different programs that allow me the freedom of any song selection. If the venue allows wifi I have a program that works with Spotify. This allows any music requests and can accommodate any theme party. When wifi is not an option I have 2tb of loaded music from Rock, Pop, Hip Hop, Oldies, African, World, Trap, House, Techno, Funk, Soul, Retro, D&B and more. In all era starting from 1940 to present. I will always dress to impress in what ever theme there is. Or not dress at all (have done topless parties lol) I am very outgoi ... ng and beautiful. Fans find me very approachable.

Everything under the sun... I have thousands of set lists.

aimee Ann Wilson was born in Barrie, Ontario in 1978 and aspired to performance DJ’ing as soon as she laid eyes on her father’s old Zenith. She was fascinated with Much Music’s Rap City, where she saw DJ’s perform live and studied countless 90’s hip hop videos, she would practice scratching daily. Later in life, she studied advertising and communication media at Mohawk College in Hamilton Ontario. While there, she gained the respect of fellow peers by taking lead on college radio and television projects. After moving to Toronto to start a career in Hip Hop in the late 90’s, she me ... t various crew members of Needle Works Entertainment. This group would later lead her into a role with Universal Records (Urban) as a promotional coordinator. She would sit in on radio shows with other local DJ’s at CIUT and Illnoize. She would often help answer calls as well as get up on the decks. In the early 2000’s she went by the moniker Jiven and was also known as an accomplished break dancer. She performed at various events including The Toronto Street Festival and Eye Dance. In music videos, she performed alongside k-os, Classified and Frank n Dank. She also worked as an assistant art director for one of Toronto’s leading clubs - The Guvernment. After long hours and many events, Jaimee decided to become a mother. When both of her children grew more independent, DJ EZii decided to come back to her first love and set out to become an international DJ. She has already traveled to Costa Rica, Cuba, Mexico, Greece, Turkey, and the USA to share her musical experiences with all in attendance. She continues to learn about the music of other cultures while honing and sharing her own craft with the local populations wherever she goes.