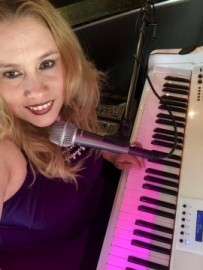 1
(no reviews)5.0
Country: United States
Based In: San Antonio, Texas
From: Contact

I am a international vocalist/pianist. I have over 25 years experience playing in Las Vegas and 6 star luxury cruiselines. I currently just finished a contract with Silverseas cruise line. 500 songs in my songbook. From jazz standards to pop and classic 70’s 60’s more.
Request a Quote
Share this Page:
Profile Views: 149
Report this profile

Hello, My name Claudette Casiano I am a international vocalist/pianist I also am a violinist as well. My act consist of over 500 songs from all styles. Classic jazz standards to current pop music from artist like Adele to Bruno Mars and more. I also play a variety of piano bar hits such as sing-a-longs from artist such as Elton John to Billy Joel. With over 25 years as an entertainer in Las Vegas and cruise lines, I am able to entertain any crowd. For easy listening, dancing or even the popular sing-a-longs. I do not limit my act. I am extremely versatile. Playing at the world famous Luxor fo ... r MGM Grand corporation has made me who I am today. I am truly an entertainer, great with the crowd and ready to entertain any lounge.

Claudette A. Casiano
Vocalist/pianist/violinist
International Entertainer/Performer
Claudettesinger77@hotmail.com
Claudette Casiano singer/pianist/violinist, from San Antonio, TX, USA began preforming professionally for parties and cultural events with her grandfather who was a guitarist at a very young age. At age ten and by this time she garnered numerous awards and won many competitions for her skill as a vocalist and violinist throughout her city of San Antonio with different bands and groups professionally.
In 1989 Claudette was also invited to perform on the long-running hit Sp ... anish-language television program Sabado Gigante which is broadcast in over fifteen countries in North and South America and the United States. After preforming all throughout Texas she decided to move to Las Vegas in 2005 and landed a long contract with MGM Mirage Corporation where she performed as a featured act at The Luxor Hotel on the Las Vegas Strip. Claudette also performed live onstage with Atlantic Records recording artist Frankie Perez as a violinist. After working several years in Las Vegas at all the top Las Vegas hotels and restaurants she decided to go international and went to work in Europe for several luxurious yachts such as The Yachts of Seabourn and The World of Residence Sea. For five years Claudette toured around the globe in counties such as Europe, Asia, South Africa and the UK. Recently she has worked for Walt Disney Cruise Line and the last four years for Windstar Cruise,
Line. Most Recently she worked for Silversea and Seabourn cruise lines.When she’s home she continues to work locally in the states between Las Vegas and Texas.