I'm looking for:
near:
No valid location selected.
You Are Here: Singers / Pianist / Singers / United Kingdom / Yorkshire and the Humber / East Riding of Yorkshire / Grahame Sinclair 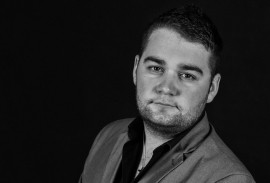 (no reviews)5.0
Country: United Kingdom
Based In: Little Airmyn, Yorkshire and the Humber
Performs: Worldwide
From: £250 per night or £1,000 p/w

A high-energy piano-bar show, comprised of songs of all genres; from standards to current pop hits. Drawing from an off book repertoire of over 600 songs.
: +44 7437 19XXXX Click here to reveal
full number

Since 2007 I have become one of the most sought-after Piano-Vocalists in the cruise ship industry. Honing my craft on over a dozen vessels and in no less than 26 different counties around the globe.
My polished, high-energy performances have graced the five largest passenger ships in the world.
With a vast, ever-growing repertoire and sharp-suited, clean cut look, I have become a favourite amongst first time cruisers and regular cruise-ship guests alike.
When land-based, I have also thrived. Working and collaborating on a number of successful studio and live projects. Both close to home a ... nd as far away as Australia.
In late 2014 Royal Caribbean, launched its new 'Entertainment Ship' Quantum Of The Seas. With such a high premium being placed on top quality entertainment; I was asked to play for the inaugural voyages. Shortly after in April '15. The Quantum's sister ship, Anthem Of The Seas was christened in Southampton, UK. Again, it was I that had the honour of being her first Schooner Bar Entertainer.

Share this Page:
Click here to view more Pianist / Singers in Yorkshire and the Humber
Browse all Entertainment Hire options!