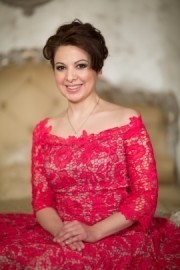 (no reviews)5.0
Country: Russia
Based In: Russia, Russian Federation
Performs: Worldwide
From: ₽2000

When contacting this member, please state that you are viewing their Entertainers Worldwide profile.
Request a Quote
Share this Page:
Profile Views: 201
Report this profile

Kristina Aglinz is a singer with a unique and distinctive voice. She performs in a style called classical crossover. This style is an amazing mixture of classical and modern music and Kristina gives it a new irresistible colour.
Kristina started to play the piano when she was 4 and went to a local music school. Then she continued her education in the Russian Academy of Music after the Gnesins in Moscow, the Russian Federation. She attended classes of an honoured All-Russian Artists, Professor Skavronskiy who brought her to the heights of success in several pianists’ contests.
An important ... step in Kristina’s development was her participation and subsequent victory in The World Championship of Performing Arts that is held annually in the USA. She became the Over-All Grand Champions of the World and won the Gold Medal in the Jazz Vocal Nomination. Till now she has been the only holder of this title in the Russian Federation. And in 2012 the president of the contest, Mr Griff O'Neil, invited her to become a member of the jury of this prestigious contest. That year the contestants from over 40 countries took part in the competition and together with Kristina some of the famous producers, composers, actors and representatives of the international music world were invited to judge the contest.
Kristina’s dedication to the highest standards in music has finally paid back. Mr Jorge Calandrelli, a six time Grammy Award and two time Oskar Award winner, has paid his attention to her and invited to work on her first solo album for the international audience.
Mr Jorge Calandrelli has produced the work of the most famous stars in the world of music, such as Barbara Streisand, Celine Dion, Yo-Yo Ma, Natalie Cole, Andrea Bocelli, Sting, Josh Groban, Tony Bennett, etc. Music lovers can enjoy Kistina’s beautiful and miraculously powerful voice in the best concerts, festivals and on the biggest stages both in Russian and in the world.
“Kristina Aglinz is not only outstanding singer but a really superb concert pianist and musician” – Mr Jorge Calandrelly.