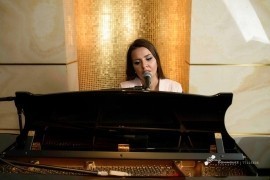 Sonja Agata Biscan is a singer/ songwriter and a multi- instrumentalist born in Zagreb, Croatia. She graduated in flute from musical high school in 2011, and has been studying voice since 2010.
At the 2012 Laureates of the Sonar Contest, Sonja was selected one of the best young performers and songwriters in Croatia by renowned Croatian producers and the Croatian Society of Composers. Her first single Na Tren (For a Moment) was released in November 2013 (Official music video: https://www.youtube.com/watch?v=7jPzLB4Hlhg).
Ms. Bišćan has taken part in several international workshops and mus ... ic colloquia such as the International Youth Orchestra in Lüchow (Germany), International Youth Choir in Slovenia, Ethno Camp for Young Musicians in Sweden and jazz courses in Norway, Serbia and Bosnia and Herzegovina. She also attended workshops in Zagreb with acclaimed jazz musicians such as Grammy Award- winning Luis Bonilla, Jim Rotondi, Sigi Feigl and Renato Chicco etc.
In 2014, she toured USA, Kenya and several European countries for 6 months with an international vocal quartet Singers of United Lands (SOUL). The quartet performed and held workshops for audiences, students and choirs of all ages and nationalities. During the tour, she auditioned in Chicago for Berklee College Of Music and was accepted to study Vocal Performance at the campus in Boston.
In October 2014 she moved to Doha, Qatar. She was the resident singer pianist in Radisson Blu for the following 6 months. She also conducted the hotel’s Christmas choir at the time.
In April 2015 she performed again at the Croatian National Theatre in Zadar and won The Best Music Prize. In May 2015 she performed and won the First Prize at the festival Bonofest in Vukovar (Croatia). In June 2015 she performed at Carpathia Festival in Rzeszow (Poland) and in September 2015 she performed at The Museum Night in The Hague Historic Museum (The Netherlands). In November she was featured at Amsterdam FM (The Netherlands) and later she performed at Kantfest in Belgrade (Serbia) where she won the Audience Award.
Her latest original single Trebam Te was released in Croatia in April 2016 and has received a warm response from the audience. (Live studio recording: https://youtu.be/FvaujtR1Srk)
From March to June 2016, Sonja worked as the singer pianist at The St. Regis, Doha, and a few months later, in January 2017, has commenced another 6- month residency at the The Ritz Carlton, Dubai, UAE.
In addition to being a musician, Sonja is a law student at The Hague University of Applied Sciences in The Netherlands, and in 2017 has spent one semester on an exchange at The Southwestern Law School in Los Angeles, USA. During her time in LA, Sonja also performed at the Kimpton Everly Hotel in Hollywood, and a number of other venues.
In 2018, Sonja has done a 4- month residency on board a Silversea cruise ship, and is currently in residency at Park Hyatt Saigon in Vietnam. 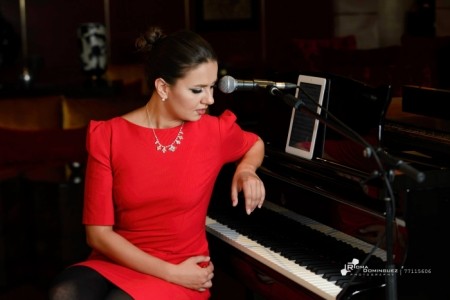 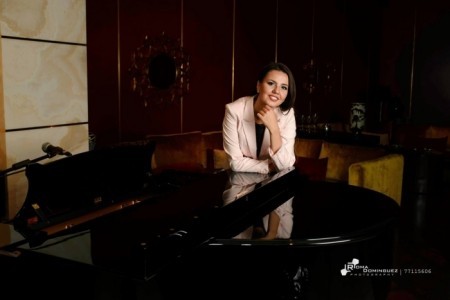 I am an educated and experienced singer pianist flutist. Up till now, I worked as the resident singer-pianist in 5* hotels in the Middle East (Ritz- Carlton, JBR in Dubai; St. Regis and Radisson Blu in Doha), and I have toured the US, Kenya, and Europe. I also performed at the Kimpton Everly Hotel in Hollywood, Los Angeles. I am a published singer-songwriter in my home country Croatia. Moreover, I had recently finished two 4- months contracts; one on a cruise ship owned by Silversea Cruises, and another one at Park Hyatt Saigon in Vietnam. Finally, apart from honing my craft through attending ... music workshops by Broadway actors and Grammy Award-winning musicians, I studied Vocal Performance at the Grażyna & Kiejstut Bacewicz Music Academy in Poland; Entertainment Law at the Southwestern Law School in Los Angeles, and I just obtained Master's degrees in Musicology and International Law from the Utrecht University in The Netherlands.