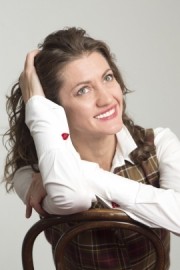 1
(no reviews)5.0
Country: Italy
Based In: Italy, Italy
Performs: Worldwide
From: Contact

When contacting this member, please state that you are viewing their Entertainers Worldwide profile.
Request a Quote
Share this Page:
Profile Views: 509
Report this profile

Domasheva Elena is a Russian organist. Born in Kharkov (Ukraine) in 1975. There she was graduated in specialised music school for children from 7 to 16 years in piano. Then she moved to Moscow where she took her degree in organ (whith Mº Alexej Parshin and Mº Oleg Yanchenko) and composition (with known Russian composer Vladislav Agafonnikov) at the Conservatory P.I. Tchaikovsky. In 2004 she finished the courses of the postgraduate at the same conservatory as organist whith Prof. Alexej Semionov. During the studies she began her concert career. She was performed as organist in the most impo ... rtant churches and philharmonic halls of Moscow, St.-Petersburg and other Russian cities as Yaroslzvl', Tver', Sochi, Kaliningrad, Svetlogorsk and even in her native land-in Ukraine at Kharkov and Dnepropetrovsk, in Switzerland and in Italy where she lives now.
In 2000 Elena was called by the Palace of Culture of Kondopoga (in Karelia-the city on the Lake Onega) to play the program for solo organ in the concert-party for Russian President Vladimir Putin who was had very positive feedback. At the same time Elena entered the "Bolshoi Theatre" as a musical consultant where she met the famous Russian choreographer Yuri Grigorovich with which she realised several productions such as "Ivan Terrible" of S. Prokofiev and "Golden Age" if D. Shostakovich.
Elena is currently working with the Rome Opera House where she had the opportunity to work together with great masters such as Riccardo Muti, Charles Dutoit, Daniel Oren, Wayne Marshall, Lindsay Kemp, Carla Fracci and Michail Baryshnikov.
At the same time it's developing the project scope of a foundation for young musicians of all nationalities and social classes.