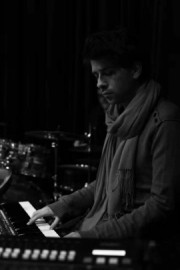 (no reviews)5.0
Country: China
Based In: China, China
Performs: Worldwide
From: Contact

Ambitious pianist, more than 20 years of music experience, free lancing in China for 6 years. Love to play solo and can easily join any band from any kind of music, very easy to adapt and learn fast.
Request a Quote
Share this Page:
Report this profile

FRANCK BOURJINI WAS BORN IN 1989 IN SPEYER, GERMANY. HE
STARTED TO PLAY THE PIANO AT THE
AGE OF 5, AND FROM 2001 UNTIL 2008 HE STUDIED CLASSICAL
MUSIC AT THE CONSERVATORY OF
PARIS VIII , WITH SABRINA BLOCH AND IRINA KAKANOV, TO LATER
STUDY JAZZ WITH JACQUES
SCHNECK AT THE CONSERVATORY OF PARIS IX.
Franck made his debut with piano competitions from 2000 to 2007 , and
has since appeared in recital, numerous bands and as soloist with
orchestra in Germany, France, Switzerland, Austria, Belgium, Poland,
Seattle (USA), China, Cambodia, Thailand as well as in Laos. Franck's
repertoire is w ... ide-ranging and diverse. He excels particularly in
Chopin's compositions. Recently he has also become interested in the
music of contemporary composers, many of whom have entrusted him
with the performance of new works. Franck Bourjini has been called
several times to record CDs either in France or in China, where he
currently lives. Since then, he has joined numerous rock and electro bands with which he has been invited to play in music festivals such as 500 Li, a tour with Coors Light in South of China and six different festivals organized by Tuborg in Yunnan, Sichuan, Guiyang and finally in Guangzhou.