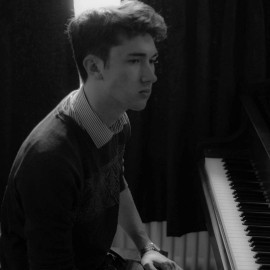 Oliver has been playing the piano at venues around the country for the last five years. He covers a large range of styles from Jazz to Popular to Classical.
: 0740006XXXX Click here to reveal
full number

When contacting this member, please state that you are viewing their Entertainers Worldwide profile.
Request a Quote
Share this Page:
Profile Views: 390
Report this profile

Now studying Music at Clare College, Cambridge, Oliver has been performing on both the harp and piano at venues across the U.K for the last five years. Alongside these instruments, Oliver is also proficient at the violin and viola, and also sings in various local choirs. On the harp, Oliver has distinguished qualifications, including most recently being awarded the Trinity Exhibition Award. This award, which is given to the best performances observed by the Trinity examining body, was granted to Oliver after his Advanced Certificate recital where he achieved a score of 98%. Oliver has won priz ... es at national competitions across the U.K and has performed various recitals at many different venues. Alongside his solo work, Oliver also performs with several orchestras, and has played with notable ensembles such as in the Durufle Requiem with the King’s College Choir conducted by Stephen Cleobury. On the piano, Oliver has a Trinity ATCL diploma with a distinction, and has won many regional competitions just with his harp performances.
Oliver prides himself on being able to cater very individually to clients needs. For all events a meeting, either in person or over the phone, will be offered in order to craft the perfect programme for your event. Oliver’s repertory for receptions and parties is typically jazz based, but he is also able to offer a wide range of Classical and Popular music.
Below are a few testimonials from clients:
"Oliver played harp for our Christmas dinner reception at Trinity Hall Cambridge 2015, and piano for our Christmas dinner reception at St Catharine’s College Cambridge 2016. Oliver’s musical skill and repertoire at both events was fantastic, and thoroughly enjoyed by all guests attending our event. We have no hesitation in recommending Oliver, and know that he would be a fantastic addition to any event." - Paul Trinder, Intrasonics Ltd, 2016
Oliver's playing on the harp at our Christmas event was absolutely beautiful - he played a wide range of different Christmas tunes and various guests said how wonderful his performing was" - Private Client, 2017
"Oliver played beautifully, and created a lovely atmosphere and ambiance at our event. We’d be delighted to have Oliver play at our future events. Kind Regards, Niki." - Niki Ovenden, University of Cambridge, 2016