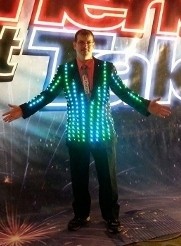 (no reviews)5.0
Country: United States
Based In: Easley, South Carolina
Performs: Worldwide
From: $125

An high energy, LED lighted, solo piano extravaganza! Musical performance of popular songs which many are songs of color and include color provided by apparel and set
: 1-864-982-XXXX Click here to reveal
full number

When contacting this member, please state that you are viewing their Entertainers Worldwide profile.
Request a Quote
Share this Page:
Profile Views: 1400
Report this profile

My show is an one of a kind, high energy piano extravaganza that uses popular music with LED lights. My jacket has 453 LED lights. Its color sequences change depending on the song that I am playing. The set and piano also have lights as well. My show is sure to capture the ear and enlighten the heart!

Music Of The Light- An LED Show with music that has color themes and movie themes:
Footloose
Eye Of The Tiger
Exodus Theme
Feeling Good
Over The Rainbow
What A Wonderful World
Love Is Blue
Evergreen
Love Story Theme
Pure Imagination
Disney Themed Show:
Circle Of Life
Let It Go
Reflection
Colors Of The Wind
Part Of Your World
Go The Distance
You'll Be In My Heart
Beauty And The Beast
So Close
Phantom-Les Mis-Broadway Show:
Phantom Of The Opera Theme
Music Of The Night
... Think Of Me
All I Ask Of You
I Dreamed A Dream
One Day More
Bring Him Home
Who Am I
New York, New York
Impossible Dream
Empty Chairs

1469821393
Rich Blough currently lives in Easley SC with his wife and three children. He grew up at the "Sweetest Place On Earth!" Hershey Penn. From an early age, Rich had a fascination with pushing buttons. Behind every button was a surprise awaiting. He naturally fell in love with the piano because it has 88 keys or "buttons". Early on, many of Rich's teachers had an influence on him because of their gift of playing the piano. One Saturday night when Rich was in second grade, a concert pianist came to his church. Rich was touched deeply by the pianist music. From that night on his greates ... t desire was to touch other people through his music. He studied piano with the late, Julia Benfer which was a former concert pianist and worked and knew pianist like Rubenstein and Vladimir Horowitz. Early on in his career he has accompanied many local southern gospel groups. He has also touched others lives through his music as a solo concert pianist in many states in the southeast of the United States. He has played piano for many South Carolina Baptist State Conferences. Since 2009 Rich has traveled the world via the cruise industry playing to crowds of many nations. In total, Rich has been to over 50 countries by cruising. It is Rich's desire to touch your life through the music that has inspired and touched his life. 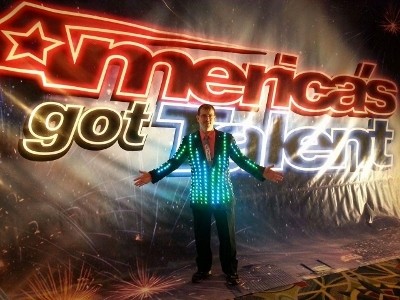 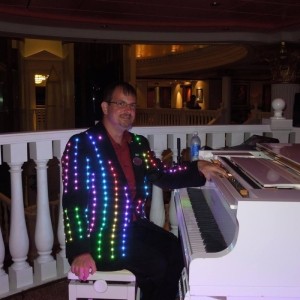 I have performed around the world via the cruise line industry! I am well acquainted with travel and audiences of many nationalities.