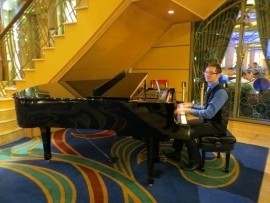 1
(no reviews)5.0
Country: United Kingdom
Based In: Erith, London
Performs: Worldwide
From: £150

Pianist performs all kinds of music from jazz to musicals to latin to pop and soul.
Request a Quote
Share this Page:
Profile Views: 720
Report this profile

Ryan performs hits from jazz to latin, pop, soul, easy listening and musicals. He can bring his own equipment including keyboard and PA if needed.

Someone Like You - Adele
All Of Me - John Legend
Just The Way You Are - Bruno Mars
etc.

Ryan was born in King's Lynn, Norfolk and began learning piano at the age of seven. He then started learning Clarinet when he was twelve, achieved ABRSM Grade VIII Piano and Grade V on Clarinet by the age of 16 which is when he took up the Tenor Saxophone and Flute.
​
He began performing professionally at 14 years old and regularly played at Park House on the Sandringham Estate in Norfolk.
​
He studied jazz piano at Royal Birmingham Conservatoire where he was taught by among others, Liam Noble, Julian Siegel, Jean Toussaint, Mike Williams and Arnie Somogyi. He later moved to London a ... nd was a member of 'Funkshone'. He performed in many places with them including the Jazz Cafe in Camden, 100 Club, fashion guru Wayne Hemingway's house for his 25th wedding anniversary, live on the Craig Charles Funk & Soul Show for BBC 6 Music and the worlds biggest extreme sports festival in Norway.
He also has performed at The Jagger Club in St. Petersburg, Russia and with Maurice Cannon from 'The Drifters' in Stuttgart, Germany. He has toured the UK with US country singer Jessica Clemmons and also performed with The Urban Voices Collective.
​
He has appeared in many prestigious venues such as Madame Tussauds for the release of the new Meghan Markle wax figure, The Wellesley, The Lanesborough, the Great Room at Grosvenor Park Hotel, The Haymarket, The Ivy, The Corinthia, The City Wine Show at Stationers' Hall near St. Pauls Cathedral and The Great Hall in St. Bartholomew's Hospital in London. He has also performed at numerous other venues across the UK including Rudding Park Hotel in Harrogate, Caerphilly Castle in Wales and Chatsworth House in the Peak District. He has also performed at Holkham Hall and Felmingham Hall in Norfolk and a private party for the owner of IBM.
​
He has worked on many ships for Brittany Ferries, Uniworld River Cruises, Windstar Cruises and Disney Cruise Line where he accompanied Broadway stars Merle Dandridge and Alton White to hundreds of people.
​
He managed to successfully run a jam session every month for over a year and performed with Roberto Manzin, Alan Barnes, Clark Tracey and Trevor Tomkins.
​
He has also written, recorded and produced his own music which is available to listen and purchase at
https://cong-fusion.bandcamp.com i have held residencies at the Lanesborough and Wellesley Hotels, Bar Eepernay in The Mailbox in Birmingham and performed for various weddings and functions.