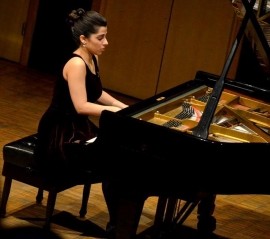 Stavroula Thoma is a Greek Cypriot concert pianist who lives in the U.K.
: 0737780XXXX Click here to reveal
full number

When contacting this member, please state that you are viewing their Entertainers Worldwide profile.
Request a Quote
Share this Page:
Profile Views: 168
Report this profile

Stavroula Thoma is a Cypriot concert pianist who has performed across Europe.
She gave her concerto debut in May 2014 with Cyprus Symphony Orchestra as part of the CYSO ‘Young Soloists First Step’ series and performed the Bach D minor Piano Concerto with conductor Roland Melia. In December 2014, she performed the Mozart D minor Concerto with Birmingham Conservatoire Repertoire Orchestra and conductor Daniele Rosina.
Stavroula's collaboration with ‘Hope for Children’ organization resulted in a series of solo charity concerts in Hungary and the UK with repertoire inspired by the ... childhood, including Clementi, Schumann, Bartok and Debussy. In 2013 she performed a recital by Hungarian Composers (e.g. Liszt, Kodaly, Dohnanyi) at Larnaka Festival of Classical Music. She was invited to the Festival again in 2015 to perform a Beethoven recital with Russian violinist Maria Oguren. Her repertoire ranges from baroque to contemporary while she especially likes to perform works that are inspired by the folk tradition.
At the age of 11 years old, Stavroula won the second prize in the Evaggelia Tziarri International Piano competition. During her undergraduate studies at Royal Holloway University of London, Stavroula was a scholar of Georgiou and Maria Tirimou’s foundation. She was awarded the Marzorie Hulzehurst Piano award and was also a Joseph Weingarten scholar at the Liszt Academy of Music in 2012-14.
​
She has studied with John Twhaites and Margaret Fingerhut at Birmingham Conservatoire. Her past teachers include András Kemenes and István Gulyás – Liszt Academy of Music, James Kirby- Royal Holloway, University of London and Eva Georgiou – Conservatoire of Classical Studies, Cyprus. She has participated in masterclasses with internationally renowned pianists such as Orsolya Szabó, Imre Rohmannn, Malcolm Bilson, Robert Levin, Carole Presland, Idil Biret, Jean Efflam Bavouzet, Peter Donohoe, Pascal Nemirovski and Martino Tirimo.
Stavroula also enjoys playing chamber music. She was a member of the 'Satori' Trio (piano, flutes: Ami Lodge, Nicola Tagoe, 2006-09) and was coached by the Barbican Trio. She has also performed in recitals with violinists, Angeliki Casdas, Peter Foskolos and Maria Oguren and was coached by internationally renowned chamber musicians such us Christopher Richter, Nathaniel Vallois and Oliver Wille.
Stavroula was critically acclaimed for her recent performances of the mono-opera 'The diary of Anne Frank' with 'About Turn Theatre' and sopranos Polly Ott and Vera Hitbrunner at Edinburgh Fringe Festival (5stars from 'heraldscotland').
She has been a Concordia Foundation Piano Artist since 2016 for which she performed solo recitals at St James' Piccadilly Church and Mcmillan Cancer centre in London. (http://www.concordiafoundation.com/piano-players​)
Composition is one of her special interest which is depicted in her published work ‘Dewdrop’, (by Aktis) a fairytale by Panayiotis Thoma for which she composed the background music and songs.
Stavroula has obtained her Advanced Postgraduate Diploma on Professional Performance at Birmingham Conservatoire with Distinction. She has released her first CD recording which is available to purchase at http://www.stavroulathoma.com/store/c1/Featured_Products.html
and as a digital download at http://cdbaby.com/cd/stavroulathoma3 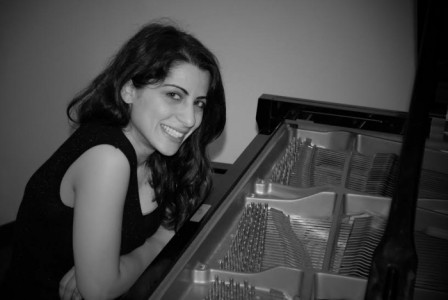