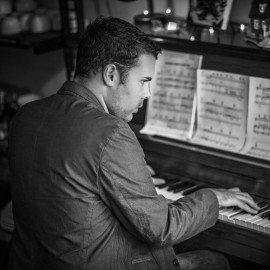 (no reviews)5.0
Country: United States
Based In: Williamsburg, Virginia
Performs: Worldwide
From: Contact

When contacting this member, please state that you are viewing their Entertainers Worldwide profile.
Request a Quote
Share this Page:
Profile Views: 578
Report this profile

All piano bar standards (1960s-today)
*Some songs in French

Tyler Austin grew up in Williamsburg, Virginia. Having an affinity for music from an early age, he was particularly interested in the piano. His parents, unsure of his discipline, held off on formal training until age 10, realizing his self-taught method of learning pre-programmed melodies by watching a light-up keyboard screen no longer sufficed.
In 2010, at age 15, he landed a gig as a piano player at Williamsburg's premier restaurant, A Chef's Kitchen. As his popularity grew with the clientele, he began performing at private events around town and occasionally performed with local ban ... ds.
In 2015, he met producer John Davenport, who signed him to a production agreement after taking an interest in the developing artist. In April 2018, they completed an 11-song album co-produced by Davenport and country music star Ira Dean. They are currently in open negotiations for distribution and publication.