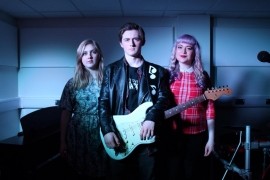 We are The Echoes. We are a three piece pop,blues, jazz and rock originals band who formed over three years ago.

The Echoes are a three piece consisting of Tom Michael - Guitar. Georgina May Dale - Vocals and Emily Hawkins - Piano and Vocals. We play our very own music which is heavily influenced by bands such as Fleetwood Mac and John Mayer. Our style of music is very laid back with catchy sucks and melodies.

We have played all over the UK. And have just completed our a degree in Music. Studying music for six years has given us some amazing opportunities. We have played birthdays, festivals,awards events, comedy events, private dinner events and have also supported many great bands.