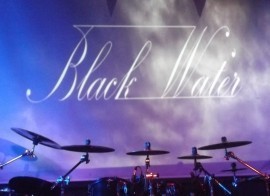 We perform a lively entertaining show of original music, with atmospheric lighting and music

OUR TALE SO FAR:
From the magical shores of the South West, Black Water’s music is becoming a unique and recognised sound. A female fronted Progressive Rock outfit with two studio albums behind them.
Black Water released their debut album ‘Fragmented’ in 2016 and after a line up change, the band set to work on their 2nd studio album ‘Diffraction’. The Album was released in September 2017 and is beginning to take off. The band are now earning their stripes and dead set on their music reaching the world stage. Black Water’s sound is both atmospheric and mysterious and can transpo ... rt you into an olde world era where you can almost imagine you are in ancient Britain.
They are influenced by bands such as Rush, Genesis, Nightwish, Within Temptation and Yes, although their influences don’t dominate their sound if you listen closely you can hear fine traces of their influences.
They have a friendly easy going attitude with a down to earth nature, which transforms when they hit the stage. Their presence is noted, twig rocks the stage and June’s vocals raise the roof.
In this world of the passing of many rock musicians, the rock scene is in need of some support. Rock in radio doesn’t hold the same presence as it used to. Black Water are contributing to fill that void in the rock world and are taking no prisoners nor is there room for apologies. They have a uniqueness that they are eager to share with the world.
Black Water manage all of their own affairs including their fan base. They are currently searching for a manager. Check the review on the band’s new album ‘Diffraction’ at
https://www.tapatalk.com/groups/blackphoenixrising/black-water-diffraction-album-2017-t2740.html
Black Water are:
June (Lead Vocals)
Mike (Guitars/Synths)
Andi (Drums)
Twig (Bass)
"A band definitely worth investigating and one to watch out for".
Black Phoenix Rising Metal Forum.
"Black Water would be great at festivals as have good stage presence and are really good live".
Legends Live Promotions.

Black Water - Rock Band - Exeter, South West Event Location: Livewire Youth Music Event Type: Metal 2 the Masses 22nd March 2018
Every member of 'Black Water' has put their stamp on the band's music. Mike Thompson's use of synths and June's emotive vocals blend together beautifully to create music that is as atmospheric and magical as the shores of Cornwall and Devon ('Facebook', 2018). The 'Black Water Band' [UK] have got several songs ready to go for a third album. They are looking for a promoter or manager that can get them further afield and further up the ladder
Reviewed by: Michael Martin
Black Water - Rock Band - Exeter, South West Event Location: Exeter Event Type: Venue 3rd March 2018
"Black Water would be great at festivals as have good stage presence and are really good live". Legends Live Promotions.
Reviewed by: Jamie

We have played venues and festivals of all sizes.
Our drummer is a professional and our singer performs in Opera societies and is a vocal coach for a very worthwhikle youth project.

Venues throughout the UK

Our singer is Dbs certified