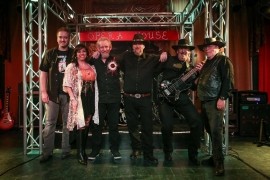 (no reviews)5.0
Country: United States
Based In: Santa Rosa, California
Performs: Worldwide
From: $2500

When contacting this member, please state that you are viewing their Entertainers Worldwide profile.
Request a Quote
Share this Page:
Profile Views: 509
Report this profile

“Original Showcase”
90 minute of original high energy rock showcase with big anthem rock ballads delivered with a stadium rock performance.
“Cover Tune Showcase”
Three hours of cover songs played with Jackson Stone Bands own unique style. Hear your favorite songs played with our own flavors. Paying tribute to all of our favorite bands but giving you a taste of our own style of the original artist. More than just a tribute act, it has our own originality added from years of performances of: Lynyrd Skynyrd, Allman Brothers, Bob Seger, ZZ Top, 38 Special, Marshall Tucker Band, Joe Wa ... lsh, George Thorogood, Rolling Stones, Tom Petty, Joe Cocker, Santana, Pink Floyd, Grand Funk Railroad, Gov’t Mule, BB King, Wilson Pickett, Eric Clapton, Molly Hatchet, Blackfoot, Jeff Beck, and Montrose. You will hear all of these influences as well as many others in a Jackson Stone Band Show.

The heritage that southern rockers such as Lynyrd Skynyrd, Charlie Daniels and .38 Special brought to America’s rock scene changed the music landscape forever. Their hard driving sound appealed to the hard riding fans that knew what a good time was all about.
In northern California, amongst the giant redwoods a new addition of this All-American spirit has emerged. The Jackson Stone Band with David Verno at the helm has been refining the southern rock sounds that took America by storm more than four decades ago. Today, these five men, together with their instruments of rock have given the ... original sounds of southern rock a rebirth, while adding to the mix a new era of home grown southern style rock and roll that shakes the band stand and thunders across arenas giving a powerful wake up call, that declares to the world.
"We Have Arrived!”