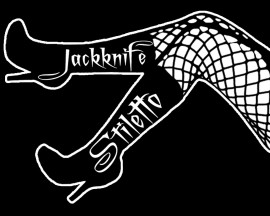 Jackknife Stiletto is an all-female rock ’n’ roll band from New York City. The trio is known for their aggressive drive and punk attitude with a fresh sound. Think Rancid meets Black Sabbath — with chicks.
Jackknife Stiletto has toured nationally, sharing the stage with acts such as Joan Jett & The Blackhearts, Cheap Trick, Murphy's Law, Cherie Currie, Less Than Jake, Anti-Flag and Bret Michaels. Their powerful live performance has also commandeered SXSW and Warped Tour. Members Annie Stoic, Mel Funk and Foxy Roxy believe in loud, melt-your-face-off music, guaranteeing one hell of a s ... exy, unforgettable rock show.
Their latest release, ‘Chronicles of Jane,’ is both a series of EPs and a comic book narrative, featuring illustrations by Toronto artist Becca T-R. The project debuted on the NACC Top 200 charts at #103 and was nominated for Best Rock EP by the Independent Music Awards. ‘Chronicles of Jane’ Volumes 1 & 2 are available now on
Blackheart Records. The band is currently in the studio working on their next album, with tours to follow.