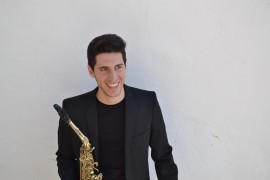 (no reviews)5.0
Country: Spain
Based In: Ibi, Spain
Performs: Worldwide
From: Contact

I play saxophone, especially classical music, but I'm a versatile musician, with a lot of experience in performance.
Request a Quote
Share this Page:
Report this profile

Carlos Montesinos (Ibi, 1991) is a Spanish saxophonist and composer based betwen Spain and Austria. From 2011 to 2015 he studied his Bachelor degree in Saxophone (performance) at the "Conservatorio Superior de Música de Aragón CSMA" (Zaragoza, Spain), with the Professor Mariano García. At the same time, he received lessons from Federico Coca and Nacho Gascón. During the academic year 2013-2014 he obtained and ERASMUS fellowship at the "Conservatoire de Lyon (Lyon, France)", where he studied under the guidance of the Professor Jean-Denis Michat. After studies in CSMA, he starts his ... Master studies on Saxophone, at the Conservatoire Royal de Bruxelles (Brussels, Belgium), where he studied with Professors Alain Crepin and Simon Diricq. Ultimately he was admitted at the Wiener Musikakademie into the "Artist Promotion Program", one again under the guidance of Professor Mariano García.
During his career, Carlos Montesinos transcribes and plays a great number of works from the Spanish repertoire, including works by composers like Manuel de Falla, Pablo de Sarasate, José Serrano, Amando Blanquer, among others. Furthemore he plays original Spanish works written for saxophone. He makes a bet by the spreading the Spanish culture.
﻿
Carlos Montesinos has performed in several countries in Europe and Africa. Countries like, Algeria, Austria, Belgium, France, Slovenia or Spain.
He performs as a soloist and chamber musician, in concert halls like Fundación Juan March (Madrid, Spain), Sala Mozart (Zaragoza, Spain), Ópera de Lyon (Lyon, France), Radio Algerie (Argel, Algeria), Grande Salle (Brussels, Belgium), BOZAR (Brussels, Belgium), Academie Royal (Brussels, Belgium), Palacio de Congresos (Andorra), Altes Rathaus (Vienna, Austria), among others.
He participates and collaborates in festivals like ARS Musica, Musiq'3, Musethica... He is also organizer and teacher of the Saxteneum Fest Festival (Cocentaina, Spain) between 2016-2017.
​