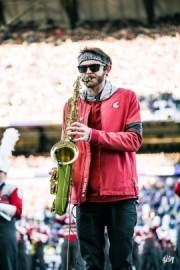 (no reviews)5.0
Country: United States
Based In: Pullman, Washington
From: $150

I am a saxophonist (tenor/alto) who can also play bass guitar, guitar, piano and sing. I have experience with playing in horn sections including writing and arranging for horn sections and as a soloist. Very energetic on stage and comfortable in front of any crowd.
Request a Quote
Share this Page:
Profile Views: 266
Report this profile

View Static Version
James T.C. works temporarily as a graduate teaching assistant at Washington State University within the Athletic Bands program specializing in woodwinds and stylistic approaches/pedagogy of large ensembles performing contemporary music. Outside of WSU, James works as a freelance saxophonist, bassist, keyboardist, and composer/arranger. He has commissioned pieces of New Orleans style brass band charts for local artists throughout the “Texoma” region of North Texas/Southeastern Oklahoma and in the Palouse region of Eastern Washington. James has appeared on recordings suc ... h as “Last Place #1” by Wasetta Switch, Nuu Wave Entertainment’s debut E.P. “Initiation”, and soon to be released single, “Come This Way” by Dusk Animals. In his studies, James performed a graduate recital at Washington State University featuring a program of all original music that will be recorded with WSU’s record label and released in August 2020.
James’ influences are found in a wide spectrum of genre’s ranging from Blues, Rock, Country, Folk, R&B, Hip-hop, Latin, and Jazz. His playing on the saxophone is influenced by the gritty nature of the signature Texas tenor saxophone sound associated with King Curtis, Arnett Cobb, and in that regard, Jr. Walker. Smooth, contemporary stylistic character of John Klemmer and Bob Reynolds, and in straight-ahead jazz, James finds his inspiration in the playing Sonny Rollins, Dexter Gordon, Joshua Redman, and many more.
James has served as an educator in the “Texoma” region as a private lesson’s instructor at Sherman ISD, Denison ISD, Bells ISD, Durant ISD and Atoka Public Schools. James has also held the position of head Director of Bands and Instrumental Music at Atoka Public Schools where he taught 5th-12th grade band, jazz band, general music, music theory, and guitar.