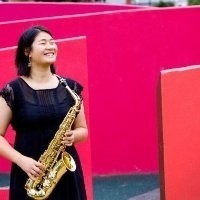 (no reviews)5.0
Country: Switzerland
Based In: Zurich, Switzerland
Performs: Worldwide
From: Contact

Hey there! My name is Kay and I am a international saxophonist, classically trained in Australia, France and Switzerland. I specialize in many different genres and love being amongst people! I play free improvisation, but also experimental, contemporary music!
Request a Quote
Share this Page:
Profile Views: 117
Report this profile

Kay Zhang is a developing and thriving entrepreneur who advocates herself through chamber music and as an interdisciplinary collaborator. She is currently founding members of the Ensemble du bout du monde (EBM) and Kollektiv International Totem (KIT). Kay thrives on working with developing composers and collaborations with other art disciplines. She has a large interest in visual communications, interjecting social memes into her work and curates many different projects and platforms around the world. She obtained her education in Australia and furthered her practice in France, Hong Kong and ... Switzerland. Kay has a great interest in cross-culture, political identity, human gender rights and environments. She dedicates herself to focus and extend her research and knowledge of her instrument but also aims to push the boundaries of performance experiences through social and multimedia, curatorial studies and culture studies.