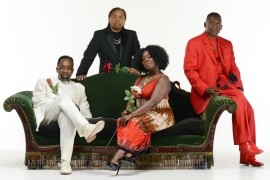 We are an R&B group consisting of four(4) vocalist performing with a five(5) piece band or music tracks. We entertain you with our charted hits, classic hits, dance and audience participation.
: 856607XXXX Click here to reveal
full number

We are a sound of Philadelphia International R&B recording group consisting of 4 vocalists and accompanied by a 5 piece bandor MD and music tracks. Our performance includes our oldies' hits, new releases, classic songs, dance music and audience participation.
We would love to bring our high energy show to your events. Looking forward to doing something great together.
Thanks & God Bless

Partial Song List:
All of My Life
Life in the Country
Wind Beneath My Wings
How Do You Keep the Music Playing
Hope That We Can Be Together Soon
Close To You
Precious Love
When Something is Wrong With My Baby
Do You Like The Way I Love You
You’re The Reason Why
It’s Forever
What Did You Do Today
I Believe
Life In The Country
When The Love Is Gone
You & I Are Friends
Wild Flower
I’m So Glad I’m Me
Hook Up & Get Down
I’ll Try
Sexy Ways
Other Classic Hit Songs……………..

The Ebonys are releasing a new CD/DVD documentary entitled "The Ebonys Forever Relevant" on MAY 1, 2018.

Share this Page:
Click here to view more Singers in Pennsylvania
Browse all Entertainment Hire options!
Looking for a different type of entertainment? Search NowContact Us