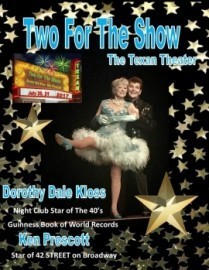 When contacting this member, please state that you are viewing their Entertainers Worldwide profile.
Request a Quote
Share this Page:
Profile Views: 1900
Report this profile

TWO FOR THE SHOW
Take DOROTHY DALE KLOSS, “One of A Kind at 92”, The Guinness Book of Records, 2009, As The Oldest Living Working Show Girl In The World, and a “Tap Dancer Extraordinaire”, and KEN PRESCOTT, Star of “42 STREET” on Broadway – and you have – “TWO FOR THE SHOW”!
It’s a TRULY ENTERTAINING ACT, featuring GREAT dancing, GREAT singing, GREAT COMEDY, and tales told from the people who actually performed in the golden age of NIGHT CLUBS, VARIETY TV, and THE BROADWAY STAGE!
With WONDERFUL MEDIA through out the show that displays each performer in some of ... the shows that made them famous, eye-popping costumes, and a nostalgic journey through the GOLDEN AGE OF ENTERTAINMENT, that will keep the audiences comepletely enthralled, THREE FOR THE SHOW will have audiences coming back for more!
As a recent audience member shouted from the standing ovation crowd, “IT’S A WINNER”!

Our current engagement will be at THE METROPOLITAN ROOM, Aug 19 and 20, New York City.
Here's the link: http://metropolitanroom.com/event.cfm?id=239813

DOROTHY:
Dorothy Dale Kloss began dancing at age three, while Calvin Coolidge was President. While teaching the legendary Bob Fosse in a Chicago Tap Dance Class, she won a tap contest, changed her name, and overnight catapulted to stardom doing her own act at the Empire Room in Chicago. She toured the country from The Strand Theatre in New York to California to Mexico City with the famous CANTIFLAS. With her exciting tap rhythms, and style she toured with Eddy Duchin for a year, and was the last act to work with his orchestra before their induction into Military service in World War II. Her ... talent and wit constantly entertained the troops for the USO in WWII. In 1946 she was the hostess and dance instructor of one of the earliest TV Shows in Chicago, “THEATRE OF THE AIR” on WBKB! She has starred with Liberace, The Mills Brothers, Mel Torme, Harry Richman, Carol Lawrence, Howard Keel, Kaye Starr, Frankie Lane, Gloria De Haven and Chico Marx to name a few. She was accompanied by such bands as Eddy Duchin, Les Brown, Tommy Dorsey, Ray Noble, Skinny Ennis, Shep Fields and his “Rippling Rhythm” to name a few. Her “Betty Grable” legs were seen for 15 years at The Palm Springs Follies, and her interview on “THE TODAY SHOW” on NBC caused a huge sensation. She was the #2 most watched interview on The AARP Website; only the nation’s Healthcare “beat her”! She received her very own star on the Palm Springs Walk Of Stars May 29, 2010. She is in the Guinness Book Of Records, 2009, as the World’s oldest, living, working showgirl. And, she just received the “Golden Halo Dance Award” from the Southern Motion Picture Council; the past recipients have been Fred Astaire, Ginger Rogers, and Cyd Charisse to name a few. She spent 15 years in THE FABULOUS PALM SPRINGS FOLLIES, and decided to leave for among other things, her new book, “I’M NOT IN KANSAS ANY MORE, LOVE DOROTHY” ! Her tap dancing is legendary, and she can “banter” with the best of them. Her New Act, TWO FOR THE SHOW, w Broadway Performer KEN PRESCOTT, Is a shopstopper! As Dorothy says, “Age is a state of mind, and her state ; “Younger than Springtime”!
KEN:
KEN PRESCOTT has won 2 Los Angeles Drama Logue Awards for his performance in the Gene Kelly in "SINGIN' IN THE RAIN" and as Eddy Ryan in "FUNNY GIRL", and 3 DESERT THEATRE LEAGUE Awards as Best Leading Performer, Best Director and Best Special Production for the spectacular "A SALUTE TO THE TROOPS”! He just completed a highly acclaimed performance as ROGER DE BRIS in “THE PRODUCERS” in Los Angeles, and won ENTERTAINER OF THE YEAR from THE MOTION PICTURE COUNCIL OF SOUTHERN CALIFORNIA! He has starred on Broadway in "42 STREET", toured the country as the star of "CRAZY FOR YOU", "SUGAR", "PAL JOEY", "WESTSIDE STORY", GEORGE M !", "THE BOYFRIEND", "OKLAHOMA", "DAMES AT SEA", and dozens of other productions. His leading ladies include Yvonne De Carlo, Vivian Blaine, Gale Storm, Alexis Smith, Dorothy Collins, Ann Miller and many more. His tenor voice soared in such roles as "THE STUDENT PRINCE", "NEW MOON" with Harve Presnell, and and extensive tour as Prince Danillo in "THE MERRY WIDOW". He had his own Big Band Show in Myrtle Beach, S.C. called "BIG BAND AT THE SAVOY" which cast him in several roles: Star, Producer, Director, and Choreographer! He just returned from Casino Magic doing “SILVER SIZZLES REVUE” as the lead singer.
As a Director and Choreographer he has created production numbers for "THE LAWRENCE WELK SHOW" and "THE ANDY WILLIAMS SHOW" in Branson Mo, and numerous productions such as "CRAZY FOR YOU", "GEORGE M !", "THE BOYFRIEND", "A DAY IN HOLLYWOOD - A NIGHT IN THE UKRAINE", and "ON YOUR TOES", which garnered him a Carbonnel Nomination and on and on. His “GENTLEMEN PREFER BLONDES” as director/choreogapher was lauded by the New York Times at Gateway Playhouse, and His recent “NUNSENSATIONS” assuming the same duties, had the critics saying “Nun Better” ! He has reprised his act many places including on the High Seas on Crystal Cruises doing his one man show called “KEN PRESCOTT – The Song and Dance Man” ! And his new act, TWO FOR THE SHOW, w/DOROTHY DALE KLOSS, IS A SHOWSTOPPER!
He has also just completed a film script and the songs for a new movie, “A DICKENS OF A CHRISTMAS” filming in 2015! 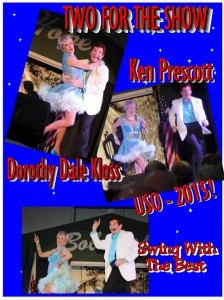 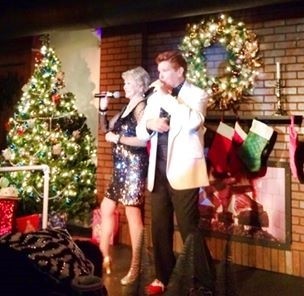 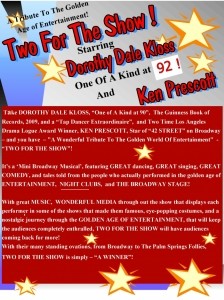 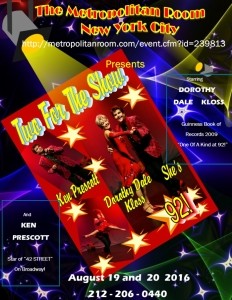 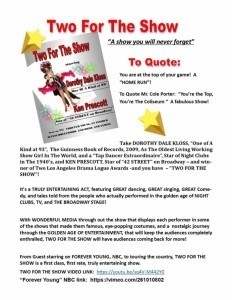 TWO FOR THE SHOW - Song & Dance Act - Palm Springs, California Event Location: Theatre, Palm Desert, Ca Event Type: Theater Show 15th July 2016
Talk about SUPER WOW! You guys really knocked it out of the ball park!! What a dazzling show you gave! You were both at the very top of your games. Ken, you really had the show fine-tuned with the pace, the graphics, and everything. Take a bow, another bow, and another.....
Reviewed by: Roger Freeman

WE HAVE A GREAT CHRISTMAS SHOW READY TO GO AS WELL!

Share this Page:
Click here to view more Singers in California
Browse all Entertainment Hire options!
Looking for a different type of entertainment? Search NowContact Us