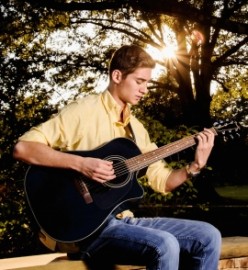 (no reviews)5.0
Country: United States
Based In: USA, North Carolina
Performs: Worldwide
From: $200

I am from Wake Forest and have been playing guitar for eleven years. My musical vocabulary has been influenced by bands such as Pink Floyd, Bruce Springsteen, and Led Zeppelin. For me, the mission behind the music has remained the same—to entertain in a positive way.
: 1-919-554-XXXX Click here to reveal
full number

Solo guitarist/vocalist from the American South, specializing in folk and classic acoustic rock.

My life is built around the creation and sharing of music. Around age three, my dad showed me a DVD of the concert film The Last Waltz, and I began to discover how enchanted I become when listening to meaningful music. It was almost an automatic instinct or reflex; I yearned to take part in making music. Within a year I began learning to play the drums and, by the time I was five or six, music had already consumed my life in many ways. When not practicing on my drum kit, a favorite pastime of my six-year-old self was counting down the months and days until I was old enough (and my hands were b ... ig enough) to start taking guitar lessons.
I was allowed to pick up a guitar and start learning when I turned seven, and once I started to play there really was no looking back. Now I’ve been taking guitar lessons for about ten years and become fairly proficient, but that gut-level feeling that comes from hearing great music is still my most profound teacher. Most of my musical vocabulary has come from simply absorbing the influence of those who best communicate through their instrument. The soundtrack of my life so far consists of classic music from bands such as Pink Floyd, Bruce Springsteen, and Led Zeppelin. In addition, compositions by these artists and others have molded my world view in ways that would have been unimaginable if I couldn’t relate to the music on an artistic level. For me, the mission behind the music has remained the same—like all artists and creative people, my biggest wish is to influence the world in a positive way, and to make people think. Performing in benefit concerts for local charities, research foundations, and food banks has been an extremely large part of my musical history and my life, and I intend to keep that up because it allows me to reach people in a way that might encourage them to help others.
Though I’ve had this drive to create and inspire for the better part of my life, there definitely were times when I had convinced myself that I could never survive and make a living doing what I love. That came to an end after attending a singer/songwriter program at Interlochen Center for the Arts in Michigan in the summer of 2015. It was a revelation to meet so many other people who were just like me; working with them and learning from them gave me a feeling unmatched by any other experience. Following Interlochen and Grammy Camp LA in 2016, I’m far more confident that pursuing a college education to become part of the music industry will give me the skills I’m still pursuing—the skills I’ve been pursuing since I first watched Robbie Robertson make music on his guitar on the DVD player in my house when I was three.