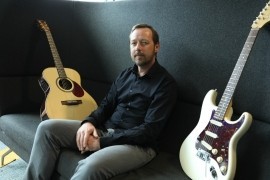 For over 28 years Eddie Miller (45yrs) has entertained music lovers throughout the UK and Worldwide with his sensational guitar and vocal skills combined. Hailing from the North East of England Eddie’s versatility caters for all musical tastes and genres from a huge catalogue of songs.
Whether it’s a small laid-back acoustic session providing that perfect backdrop for a special gathering or a larger event such as a wedding, festival or big rock gig showcasing his electric guitar prowess, Eddie really does have something for everyone in his musical repertoire for every occasion.

In ... addition to his solo career Eddie plays regularly as part of a duo and has also played alongside many original and cover pop, funk, rock and blues bands throughout the world.  When he’s not on the stage Eddie can generally be found playing around with new melodies and working on his latest album in his recording studio.

My experience of working in many bands over the years as well as 1000's of solo shows covering Great Britain and Seasons in Austria (5years resident in 4*Hotel Strass in Mayrhofen playing to all Nationalities from across the world gives me invaluable confidence in how I can present and perform. I've also worked seasons in Irish bars in Spain.
More recently I performed as part of a duo on board the residential cruise ship The World which was an honour.