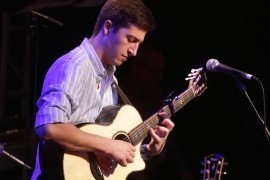 (no reviews)5.0
Country: United States
Based In: Minneapolis, Minnesota
Performs: Worldwide
From: Contact

I specialize in instrumental, acoustic guitar music. It's great for background as well as front and center. Audiences will be mesmerized by my percussive and modern technique, and they will love the beautiful melodies and personality I bring to the stage.

Matteo Palmer has been playing guitar since the age of eight, both electric and acoustic. His passion for acoustic fingerstyle guitar developed after seeing Alex De Grassi perform live, and he soon reached out to Grammy winning guitarist and producer Will Ackerman to pursue his music further. At the age of seventeen, he recorded his debut album “Out of Nothing” at Will’s Imaginary Road Studios. He has been recognized internationally for his guitar playing, and last year, he was a featured performer at the 11th annual Zone Music Reporter Awards Show in New Orleans.
His second album wa ... s again being produced by Will Ackerman and was released summer of 2016. Matteo is currently studying Composition and Music Production at McNally Smith College of Music in St. Paul, MN.