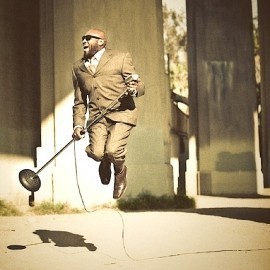 (no reviews)5.0
Country: United States
Based In: Los Angeles, California
Performs: Worldwide
From: $4800

Shawn Atkins is a 70's style soul singer ala Marvin Gaye, Curtis Mayfield, Al Green with the passion of Otis Redding and vibe of D'Angelo, come ready to dance. It's an energetic show, very entertaining driven by top tier musicians. It's a great show for couples.
: 916607XXXX Click here to reveal
full number

When contacting this member, please state that you are viewing their Entertainers Worldwide profile.
Request a Quote
Share this Page:
Profile Views: 135
Report this profile

Shawn Atkins Show is a through back to when artist brought it to the stage and put it all on the line... The show is a positive all ages high energy performance sure to keep the audience attention. Shawn Atkins show is professional, polished and moves along like a well oiled machine. To keep the crowd dancing on it's feet and singing along while delivering the best performance is the target. Shawn Atkins is set to tour doing what he loves most, singing both original and cover tunes around the world bringing people together though music with love promoting togetherness...

Shawn Atkins is has traveled the world behind the scenes with several major artist as tour manager, stage manager, road manager, security, personal assistant and backline tech, roadie roadie roadie, all the duties required to put a show up he has done them. After traveling with the likes of Toni Tony Ton'e, Parliament Funkadelic, Hanson, Roy Hargrove, Mariah Carey, Soul Train Cruise and for the last 10 years with Mr George Benson (stage mgr.)... one day George Benson said, I see you getting better and better, you should do something on your own. That's the day he got serious about music and wh ... at he was going to do. He's always been a songwriter and a very decent drummer looking for opportunity to submit a song or play drums for different bands all in hopes of getting a chance to make a living in show business. By some twist of fate he became a roadie (1993) for Tony Toni Ton'e and never looked back. Today Shawn Atkins is in LA performing and showcasing around town at all the hottest open mics and clubs in town. It's a new day and you can find Shawn Atkins climbing the ladder on the music scene so be on the lookout for this "soul man" taking the stage worldwide! 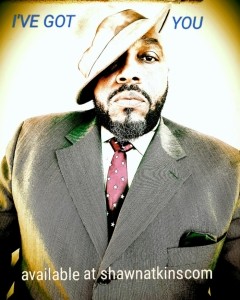 Shawn Atkins has performed on stage in front of sold out audiences with Raphael Saadiq (Vocals & Perc), Parliament Funkadelic, George Benson (Drums & Vocals) as well as his own solo performances around LA with some of the top tier musicians in town. After years behind the scene he is without a doubt on his way to becoming a viable artist in his own right on the music scene.
The progress has been great, the development has him on a trajectory that will allow him to share his music with the world and add to the Love and Positivity we "all" need to feel.
Pleas stay Tuned