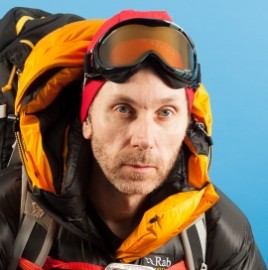 Elis Stewart - The Everest Dream – One Dream One Chance One Life! An amazing talk of inspiration and hope over tragedy and adversity.
: 0781515XXXX Click here to reveal
full number

When contacting this member, please state that you are viewing their Entertainers Worldwide profile.
Request a Quote
Share this Page:
Profile Views: 866
Report this profile

Ellis Stewart The Everest Dream – One Dream One Chance One Life!
Ellis J Stewart became an unlikely inspiration to thousands of followers on social media when in 2014 and again in 2015 he witnessed and survived the two worst disasters in the history of Mount Everest climbing whilst attempting to reach the summit of the mountain himself. Nobody could have anticipated that Ellis Stewart would have the rug pulled out from beneath his feet, not once but twice in back to back attempts. Ellis Stewart's resolve and sheer determination to reach the mountain in the first place was without a do ... ubt a feat in itself. Having dreamed about climbing the mountain for 30 years he finally got the chance in 2014, after a life of preparation and a never give in mentality. The events that followed were unparalleled in Everest mountaineering.
Ellis Stewart admits that through his Everest journey he accidentally stumbled into public speaking but has since relished the opportunities to share his story with all manner of organizations and groups. To date Ellis Stewart has delivered keynote talks to large IT expos, Outdoors festivals and EDF energy during an away day event to name just a few and has received some truly outstanding testimonials.
During a live talk Ellis Stewart delivers on the following topics, which he interweaves around his experiences on Everest.
Resilience and overcoming danger and misfortune.
The power of passion and mindset
Creativity – achievement with limited resources
Risk management
Surviving an avalanche – what goes through the mind at the point of a near death experience
Bouncebackability – Recovering from setback and getting straight back in the driving seat.
Its not about the end result, it's the journey that counts and shapes us.
Ellis Stewart is now available to share his amazing story - Be amazed and Inspired

Ellis Stewart currently resides in the north east of England with his wife and two young daughters. For a day job he runs a sports merchandise company supplying event apparel to running events and other adventure-based activities.
In 2006 Ellis Stewart graduated at Teesside University with a 1st class honors degree in e-Business and promptly set about the creation of his business.
For over 20 years Ellis Stewart harbored a very real and often obsessive goal to scale the highest mountain in the world, Mount Everest. Ellis had the dedication and the drive in abundance but could never qu ... ite muster the enormous financial outlay required to climb the mountain. Consequently he missed out on expeditions in 2002, 2003, 2007 2012 and 2013 falling short of the funds required. Not to be deterred Ellis Stewart tried again for 2014, and this time through a combination of a few entrepreneurial initiatives and a large following of supporters on social media he was able to finally leave for Nepal in March 2014 with the goal of climbing the south-east ridge route of the mountain.
Ellis Stewart was able to take his place on the expedition in large part due to the success of an Everest themed clothing brand, which Ellis launched, designed and marketed and produced. Everest Dream – One Dream One Chance One Life became a huge online hit and Ellis Stewart sold thousands of unique t-shirts and hooded tops to people all across the planet.
Unfortunately during this attempt after 19 days of trekking to reach the mountain an avalanche claimed the lives of sixteen Sherpa guides one day ahead of Ellis on the mountain and put an end to all climbing on Everest, an unprecedented event. Ellis Stewart returned home shell shocked and devastated at the loss of the goal without stepping foot on the mountain.
In 2015 Ellis Stewart was able to rally and return instantly to the mountain for one more try, thanks to another herculean fund-raising effort and more sales of the Everest Dream clothing range. Little did Ellis Stewart and the rest of the world realize that lightning was about to strike twice. Once more Ellis Stewart would be caught up in events outside his control as another unprecedented disaster swept down the mountain. This time Ellis was inadvertently caught up in the Nepal Earthquake and narrowly survived a devastating avalanche on Everest. Over 35 people died on Everest in the two years Ellis Stewart made his attempts including 3 members of his own Nepali support team on April 25th.
Ellis Stewart uses these experiences on Everest as the basis by which he delivers a highly engaging and inspirational tale of hope over adversity and tragedy.
He has shared this story and the core messages to various backgrounds and corporate audiences.
Ellis Stewart is not a professional mountaineer who routinely visits the Himalaya to climb. He was a pretty unlikely fellow from a non-traditional climbing background who just simply harbored a big dream to reach the roof of our planet.
It took 20 years for Ellis Stewart to finally have an attempt on Everest after rigorously pursuing this goal with complete focus and determination. Ellis Stewart was abilty to self-fund the almost $100,000 needed to enable him to make the two back-to-back attempts on the mountain. This was done almost entirely without corporate assistance or sponsorship.
Ellis Stewart is the author of a book entitled Everest – It’s not about the summit, which was published in the Autumn of 2016.
Ellis Stewart is now sharing his story - Be Inspired! 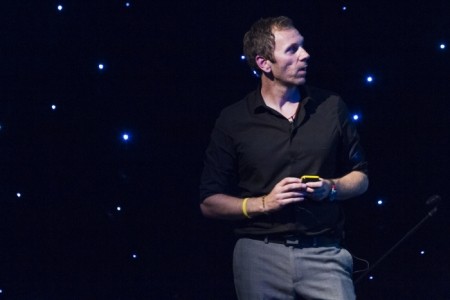 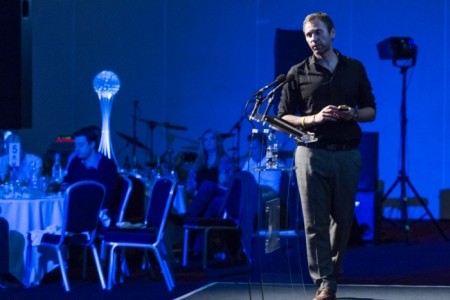 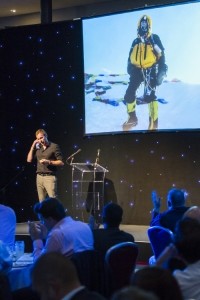 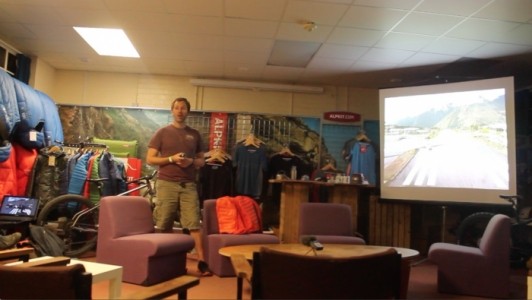 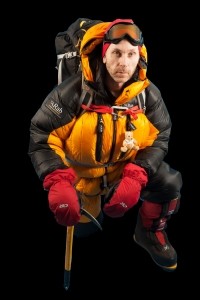 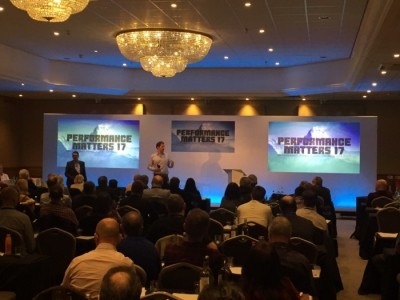 Ellis James Stewart - Speaker/Toast Master - Hartlepool, North East England Event Location: Holyrood Palace. Edinburgh Event Type: Awards Ceremony 3rd July 2016
"I had the great honour of being a Presenter Marshal at the Duke of Edinburgh’s Award Gold Ceremony at Holyrood Palace in Edinburgh. Ellis Stewart was the presenter. What a fascinating, awe-inspiring, personable man he turned out to be. He handed out awards to the young people and then stayed to chat and answer questions. Nothing was too much bother – many of the young people were keen to look at his DofE Record book and discuss those experiences as well as those on Everest and conversation flowed. I would thoroughly recommend Ellis as an inspirational speaker – he is an inspiration to us all." Lisa Hignett, DofE Manager.
Reviewed by: Lisa Hignett
Ellis James Stewart - Speaker/Toast Master - Hartlepool, North East England Event Location: London Event Type: Corporate Christmas Event 10th December 2015
Ellis Stewart delivered a talk on his experiences ‘on the mountain' to a room of EDF Energy's IT Leaders. His delivery was confident, entertaining & full of inspiration. He managed to take us all on his journey from the boy who had a dream to the man who almost managed it, with his North East charms he was really easy to listen to and focused on the audience. The key takeaway for the room were the qualities required to deliver on his dream, teamwork, dedication and planning all of which we recognized as valuable attributes in our day to day practices. Ellis Stewart says he lives by the principal of ‘One dream, one chance, one life’ and this was very much embodied in his talk. I’d thoroughly recommend. Craig Gill CIO Business Partner EDF Energy
Reviewed by: Craig Gill
Ellis James Stewart - Speaker/Toast Master - Hartlepool, North East England Event Location: Hartlepool Event Type: Career Event 21st November 2014
On behalf of Hartlepool Borough Council- Economic Regeneration Team I would like to thank you Ellis Stewart for your attendance at Hartlepool’s Global Entrepreneurship Event on 21 November 2014. Your opening speech was thoroughly engaging and your inspirational message helped get the event off to a great start. The feedback from the secondary school students that attended, their teachers, local businesses and local authority staff was that you made a lasting impression on them, describing your speech as “excellent”. Feedback from the students from included “never give up on your dreams” and “that you have to keep trying and challenging yourself”. Caron Auckland Project Officer- Employment Economic Regeneration Team
Reviewed by: Caron Auckland
Ellis James Stewart - Speaker/Toast Master - Hartlepool, North East England Event Location: Milton Keynes Event Type: Corporate IT Event 2nd October 2014
Ellis Stewart delivered an impeccable after dinner speech which was both inspiring and a real eye opener to the dedication and commitment needed to reach ones dream….however long it takes. The feedback from the +150 people who attended from across businesses’ in the IT industry was that he made a lasting impression on them and was a great choice for our inaugural alliance event. Tony McMurray Regional Finance Director Ingram Micro UK Ltd
Reviewed by: Tony McMurray 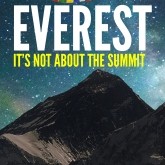 Everest - It's Not About the Summit


Everest – It’s not about the summit, is a remarkable account of a lifelong goal crushed in spectacular fashion two years running by the two worst disasters in Mount Everest’s history. Throughout it all Ellis Stewart displays a sense of humility and compassion sharing a heartfelt and emotional twenty year journey. From the streets of northern England through to the valleys and high mountains of Nepal, Ellis Stewart shared his story with thousands of followers on social media, winning over the hearts and minds of many. A ground swell of support sent Ellis to achieve his dream, not once but twice. Nobody could have anticipated the events that would follow. Events that would define the author in ways he couldn't possibly have imagined.