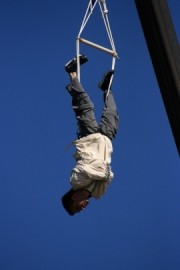 (no reviews)5.0
Country: Argentina
Based In: Argentina
Performs: Worldwide
From: Contact

I performed shows at hotels, theaters, stadium, shopping malls in more than twenty countries all around the world.
Request a Quote
Share this Page:
Profile Views: 128
Report this profile

In his shows, you can see escapes as well as techniques performed by fakirs from India and amazing extreme mental feats developed in the Far East. He appeared in numerous tv programmes all over America, Europe and Asia where he showed his extreme performances.

Magician, Fakir, Escape Artist, Martial Expert Artist, Magic Consultant, Lecturer.
He discovered the fantastic world of magic and its deepest secrets 20 years ago.
He has obtained great physical and mental training in martial arts throughout the latest 25 years.