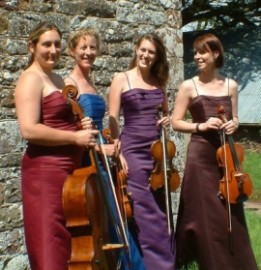 Musical entertainment for weddings, parties, businesses, corporate functions, and special occasions of all kinds.
We are a dynamic young group of professional string players with an extensive repertoire of classical and many other styles such as pop, jazz and folk. We pride ourselves on providing an efficient, friendly and fuss-free service, and on tailoring our programme to suit your individual needs.
We can also perform as a string trio or duo. If you are interested in either of these options please ask.
We are based in the South West of England and regularly play in all the sout ... hern counties from Cornwall to Gloucestershire. We travel well, though, so if your function is outside this area, please get in touch.

Megan Reeves (violin) is currently studying Psychology at the University of Exeter where she is a Music Scholar. She began playing the violin aged 5, and has been involved with many orchestras and ensembles, including the National Children’s Orchestra and Somerset County Youth Orchestra. She has always had a passion for chamber music, having reached the final of the National Music for Youth festival in London. Locally, Megan enjoys organising and playing in charity concerts. She now plays with the Exeter University Symphony Orchestra.
Cindy Rawson (violin) is a successful international ... competitor in equestrian sport (Cindy Rawson Event Team) who has returned to her first love of music. She received most of her musical education in the United States, winning many regional and Texas State awards. She now studies under Jane Gordon. She plays in the Exeter Music Group Symphony Orchestra, the Isca Chamber Ensemble and takes part in the Classic FM Two Moors Festival.
Kate Grayshan (viola) learnt the viola from a young age and went on to study music in Cambridge and the United States, where she played as an orchestral and chamber musician throughout West Virginia and the surrounding states. A local businesswoman, Kate has played with orchestras and ensembles in Europe and throughout the South West, including the Exeter Music Group Symphony Orchestra and Isca Chamber Ensemble.
Catherine Warren (cello) is a graduate of Bath Spa University College and the Welsh College of Music and Drama. She has played with the BBC National Orchestra of Wales and is a member of Orchestra West and South West Sinfonietta. She combines her orchestral and chamber work with conducting and musical direction, including the Exeter Male Voice Choir and Exeter Little Theatre Company. 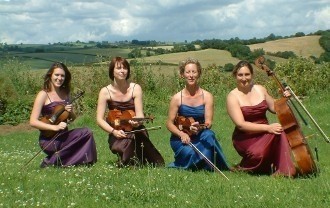 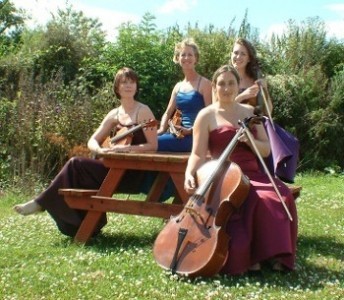 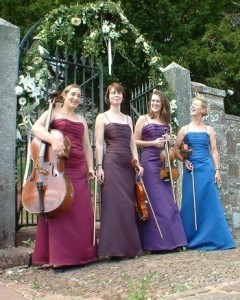 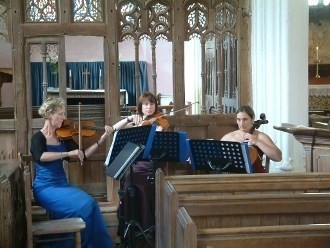 Group members trained variously in Europe and America and are currently mentored by concert violinist Jane Gordon, herself a long time student of Dona Lee Croft of the Royal College of Music.