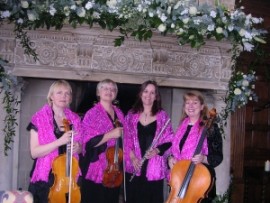 Devon and Cornwall based, Pink Champagne String Quartet is one of the most outstanding string quartets specialising in playing music for civil wedding ceremonies, church services, civil partnerships,
Request a Quote
Share this Page:
Profile Views: 717
Report this profile

Providing an elegant focal point for any occasion, Pink Champagne String Quartet is frequently seen playing at weddings in Devon and Cornwall.
Outstanding musicians who are professional, friendly and stylishly presented will add to the wow! factor at your celebration. We have found that our special flute option (flute + three strings) is increasingly popular and frequently requested.
We are happy to move location and simply need four chairs and enough space and light to play! We can even play outside if the weather is really fine (sadly not in wind or drizzle!).Devon and Cornwall based, P ... ink Champagne String Quartet is one of the most outstanding string quartets specialising in playing music for civil wedding ceremonies, church services, civil partnerships, entertainments, concerts, corporate functions, fundraising and other events - perfect music for your wedding or special occasion!
String Quartets are not just for weddings and civil partnerships, but for any occasions, for example birthday or anniversary or launching a new car, where you want to create a beautiful atmosphere with music ranging from classical pieces everybody knows to songs from the 1920s & ?30s, tangos, waltzes & rags, with a repertoire spanning Bach to the Beatles.
Although a String Quartet is not suitable for an evening dance, we often find people dancing in response to such favourites as "Singing in the Rain" or The Can-Can!
Formed in 1990, Pink Champagne has appeared on Granada TV, at many occasions attended by Royalty, football stars, and people of all ages 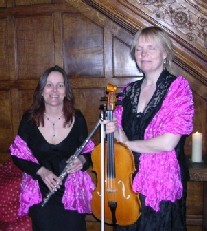