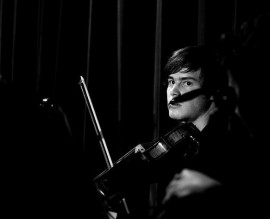 String quartett was established in 2013 by Peter Zaskovsky. Members of this quartett are graduates of Academy of performing ATS in Bratislava, Slovak Republic.
Request a Quote
Share this Page:
Profile Views: 336
Report this profile

The Quartett Unlimited
String quartett was established in 2013 by Peter Zaskovsky. Members of this quartett are graduates of Academy of performing ATS in Bratislava, Slovak Republic.
Our repertoire consists of many different genres such as classical music, latino, jazz, blues and pop.
Since 2013 quartett playes in Slovak National Theatre in Bratislava.
Creative director of Quartett Unlimited is Peter Zaskovsky.
Peter Žaškovský viola
Founder and creative director of string quartett "The Quartett Unlimited" played in:
. 2008- 2010 Chamber Orchestra, Bratislava
. 20 ... 11- 2013 European Union Youth Orchestra, London
. 2013- present day as member of string quartett in Slovak National Theathre, Bratislava
Peter Zaskovsky, as a viola player, was a part of many successful projects and concerts not only in Europe but in the US as well. For example:
. Amsterdam Concertgebouw
. Berlin Konzerthouse
. Boston Symphony Hall
. Washington Kennedy Center
. New York Carnegie Hall
He feels privileged to say that he had the opportunity to work and play with legendary musicians such as Itzhak Perlmann, Pinchas Zukermann, Yefim Bronfman, Khatia Buniatishvilli or Vladimir Ashkenazy.
In addition to playing the viola, Peter is devoted to the composition and jazz singing.
We are able to send you recordings of our performence or absolve a skype audition as part of application process.