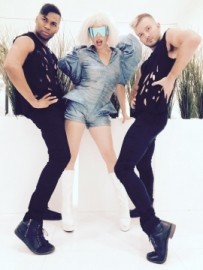 (3 Reviews)5.0
Country: Canada
Based In: Toronto, Ontario
Performs: Worldwide
From: $100

SOCIAL DISTANCING SPECIAL: Social Distancing Special: For $100, have Athena join you (in character) in your zoom meeting! Or, hire her to create a personalized video for your company or virtual event.
GAGA
Lady Gaga International is one of the world's leading Lady Gaga tribute companies. LGI is known for breathtaking live vocals, real Haus of Gaga choreography and sensational costumes that capture the look, feel and sound of Lady Gaga's shows.
Founded by award winning actress and singer/songwriter Athena Reich, Lady Gaga International is one of the only Tribute Companies endorsed by ... Lady Gaga herself. In Gaga's words, "Tell her (Athena) that she can use my image whenever and however she wants". Gaga also tweeted in support of Lady Gaga: #ARTBIRTH. And, in February 2015, Billboard Magazine printed an image of Athena, thinking it was Gaga. In June 2015, The Wendy Williams Show made the same mistake. Also, Haus of Gaga asked Athena to be in Gaga's "Edge of Glory" Google Chrome Commercial. Athena is often mistaken for Gaga by paparazzi and fans and has been featured on Page 6 (twice). Chatelaine Magazine in Canada called her the "World's Top Lady Gaga Impersonator" and City TV and CBC in Toronto recently ran a news segment about her.
Currently, Athena is featured in the Emmy nominated documentary Vegas Baby, as seen on PBS and available on iTunes, Netflix, YouTube Movies and Amazon.
LGI has 2 shows in production, "We Are All Superstars: A Lady Gaga Tribute" and "LADY GAGA: #ARTBIRTH". "Superstars" is a 90 minute family friendly musical that portrays Lady Gaga's rise to fame and her passion to end bullying. #ARTBIRTH is a hilarious musical of art, pop and comedy that combines vaudevillian comedy with downtown ARTPOP-outrageousness. #ARTBIRTH ran for 2 years in New York City at the Laurie Beechman Theater (and received Time Out Critics Pick) and ran in Toronto at the Berkeley Street Theatre in August-September 2017. Stay tuned for more #artbirth runs. "Superstars" tours to theaters, arenas and festivals internationally.
MARILYN
Athena sings the classics such as "I Wanna Be Loved By You", "Diamond's Are a Girl's Best Friend', and, of course, "Happy Birthday". Transport your party back in time with this classic and talented modern day Norma Jean.
ALANIS
You Learn, Thank U, Uninvited, You Oughta Know and more. Live vocals. Grunge nostalgia. Lots of hair.
CHER
Athena has an absolute blast performing as Cher. Hits such as "If I Could Turn Back Time", "Believe", and "Strong Enough" are sung live with incredible believability and gusto.
CELINE DION
Athena sings live, is fluent in French, captures an authentic French Canadian accent, and will make you laugh with impressions and anecdotes from Celine's life.
MADONNA
Enjoy "Like a Virgin", "Material Girl" and more sung live, complete with bangles and laced gloves. Throw an 80's themed party and reminisce about those easy slouch-socked, high-stock-market times.

Athena Reich is an actress, writer and "world's top Lady Gaga Impersonator" (Chatelaine). Her show, Lady Gaga: #ARTBIRTH, received Time Out Critic's Pick in NYC and played at the Berkeley Street Theatre in Toronto. Athena's journey to parenthood (and as a Lady Gaga Impersonator) is featured in the Emmy-nominated documentary Vegas Baby, available on iTunes and Netflix worldwide. Recent acting credits include national commercials in both the US and Canada, The Woman Who Can't Lie (Dir. Don McKeller, with Sandra Oh) and White Collar (USA Networks). As a writer, Athena publishes in HuffPost, Chate ... laine, and Today's Parent and has just beta-launched Alternative Families International Magazine. 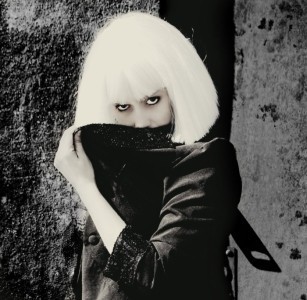 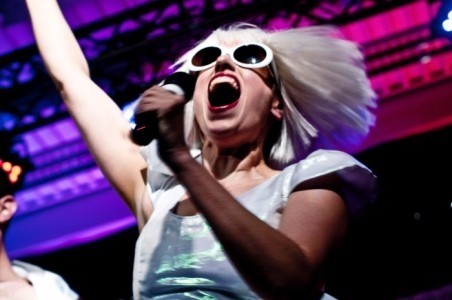 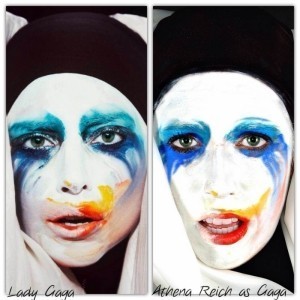 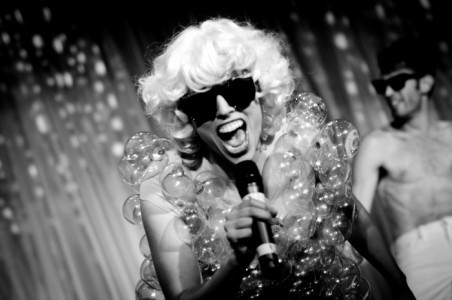 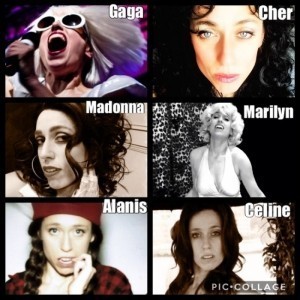 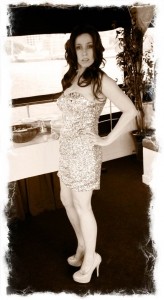 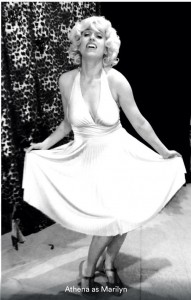 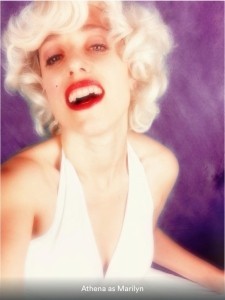 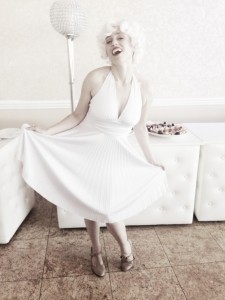 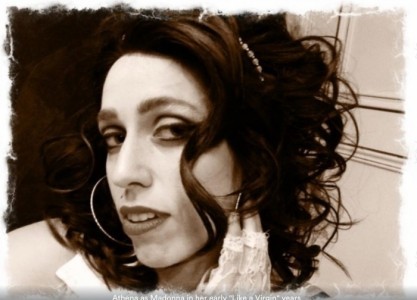 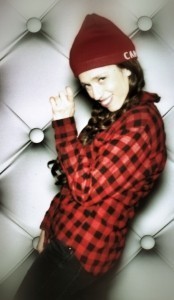 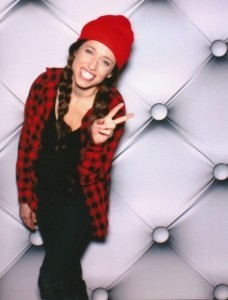 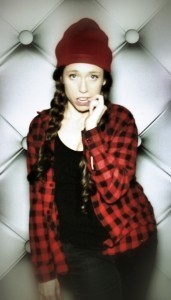 Audiences have a great time dancing, singing along, or simply enjoying the entertainment. Athena is a powerful singer and her dancers are true professionals whose choreography is dynamic, tight, energized and true to the real choreography. Athena will work the crowd, and can get any party going. She will charm any event, from Bat Mitzvahs to Corporate Events to College Dance Parties to Night Clubs to Outdoor Festivals to Weddings to Trade Shows. Athena loves to interact with the audience afterwards, taking photographs and signing autographs. She has a blast as a performer and her joy is contag ... ious. She is a true talent you will never forget.
What sets Athena apart from the other impersonators is that she has a large set list to select from, a large roster of characters, she is an incredible singer, her dancers are professionals who do authentic choreography, her costumes are top quality, she is constantly mistaken for the real GaGa in her own life, and her sweet nature makes her instantly lovable. She has numerous repeat customers and referrals. Athena is an award winning actress and singer/songwriter so her extensive and diverse talent and training make her stand out from the rest.
Also, Athena has a full 90 minute tribute show. It's a musical theater experience that premiered at the Arcadia Theater in February 2014 to over 400 people. It was a smash and Lady Gaga International is currently shopping for more venues for this family friendly 90 minute show.

ATHENA REICH ROCKS OUR FAMILY REUNION !
Athena came to our family reunion and left us all mesmerized, and still in shock. Her performance was amazing. As soon as I introduced her, the hall became very quiet, as she was a surprise for our family. They believed she was the real Gaga from start to finish. She made my big sister faint! All the kids followed her throughout her whole performance. She sung live and her voice was beautiful. She even gifted us with one of her original dance songs. What an amazing and beautiful performance. Thank you Athena for making the Howard Banks Reunion on July 1 ... 9th, a night we will never, ever forget. You have 220 new fans. We love you!
***
MASSIVE HIT!
As a prank we hired Athena as Lady Gaga and spread rumors the real Gaga was coming to perform.
Athena stayed in character from start to finish and she was an incredible performer - talented, dedicated and an absolute pleasure to work with. I have already and will continue to recommend her. She did such a great job that we even were in Page Six about the event!
***
Athena FAR EXCEEDED any expectations!
Athena was EXCELLENT as Lady Gaga at our Play with Grace Carnevale Costume Ball fundraiser. Many of the guests who had been to a Gaga concert said Athena was spot on! She was interactive with the audience and riveting! She was fantastic to work with also. Very clear communication, very flexible, and performed as she said she would. We were delighted we had her at our event! We would recommend her to anyone and everyone. Can't actually imagine a BETTER LG impersonator than Athena.
***
Amazing performance
Athena really gave her best performance, amping up our office party as Gaga. Could have thought she was the real thing!
She arrived on time, gave a great performance, interacted in character with our guests... AMAZING! Thanks Athena!

Request a Quote
Share this Page:
Click here to view more Tribute Acts in Ontario
Browse all Entertainment Hire options!
Looking for a different type of entertainment? Search NowContact Us