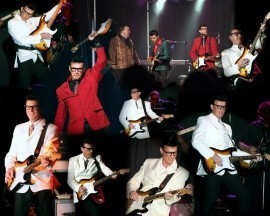 a full musical production with live band paying tribute to one of the pioneers of rock and roll, Buddy Holly

1. Basic Facts:
A.) When is your birthday?
8/18/65
B.) Where were you born?
I was born in Hammond, Indiana.
C.) What is your favorite color?
My favorite colors are Blue and Black.
D.) What was your favorite subject in grade school?
I don't think I had a favorite subject in grade school but I do remember always loving music.
E.) What are your favorite hobbies?
My favorite hobbies are hunting, fishing, traveling, playing the guitar.
2.If you could trade places with someone for a day, who would it be? Why?
I don't know of anyone I would want to trade with. I am happy with who I am t ... oday. Maybe some big actor or something just for fun.
3. Where did you get your love for music?
I was born in 1965 (August 18th). I grew up in a family that was into music. My father is my biggest inspiration. I learned to play guitar from him. I learned to sing from him. He would sing Johnny Cash, Hank Williams, Elvis, Carl Perkins and all kinds of what I call "Honky Tonk" singers. So my musical influences came early and were that of my family. I always felt that our music that we listen to today is taken from the music as early as the late forties and early fifties. I hold all of those artists with great respect for paving the way.
4. You have worked with many great performers. What have you learned from them?
I have had the luck and honor of working with, and meeting with, some of the greats. The Drifters, The Coasters, Chubby Checker, Tommy James and the Shondells and in the country field Marty Stuart and Willie Nelson. They all have had an effect on me. I have learned from each person on how to conduct yourself on and off stage. The most pleasant surprise was learning that most of them are Christians also. It made me realize that you can be a Christian and still perform rock and roll and not worry about people thinking you're the old cliche of what is portrayed by so many. Marty Stuart was the best. We talked and I jokingly told him that when we meet again that is going to be when I am walking off stage and he is walking on. Meaning I was going to be his opening act. Then I said, "No, he is going to open for me." He stopped and told me that I have a good attitude and the right heart. He said at that point, "If you know it's out on you to doand it's in your heart, the Lord put it there and if you work with Him then you will make it." I felt that to be a huge statement and always refer to that when I feel I need a kick in the pants.
5. Have you always wanted to be an entertainer?
I think I always knew that it was what I was going to do. I held down a few different jobs(construction, car sales, managed music stores, owned a music store) but always knew that I was going to entertain. And have since I was 16.
6. Do you feel you're like Buddy Holly in any way?
I don't know if there are any similarities with Buddy Holly outside of the music. I think he was just as passionate as I. From what I have learned, he had a lot of fun on stage, and I do too. I try to spread that fun around. I read his book and know that he loved to try things. He bought a motorcycle, a ski boat, cars. I don't have a boat, but I love my motorcycle and I like cars.
7. What are your favorite:
A.) Books?
My favorite books are biographies. Buddy Holly. Carl Perkins. I just now received Waylon Jennings', He was Buddy's bass player on his last tour. Wyatt Earp was good. In school my favorite was To Kill a Mockingbird.
B.) Movies?
My favorite movie is probably Tombstone. It was about the days of Wyatt Earp and Doc Holliday.
C.) Television shows?
I don't get to watch tv too much while doing the show, but I would have to say I like ER. I got hooked on The Sopranos (HBO) but don't have cable here. Probably my favorite is Andy Griffith. Gotta love Barney.
8. Your voice is remarkably like Buddy Holly's. Have you had to have any special training to achieve this sound?
I did have to work on the Buddy Holly voice to get the right dialect. His phrasing was the most important. Our range is similar, but I had to work on his accent. It's funny, because I had a little bit of that coming from Indiana. Some of us up there do have a little slang to our talk. When I moved to Las Vegas, I worked in an acting class and was taught proper diction. Buddy being my career, I just lost it and went back to the accent. Weird how thing work out. 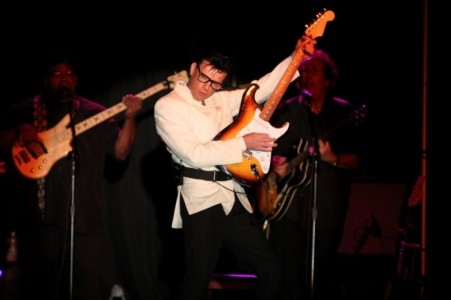 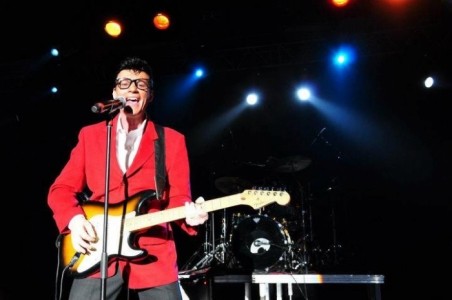 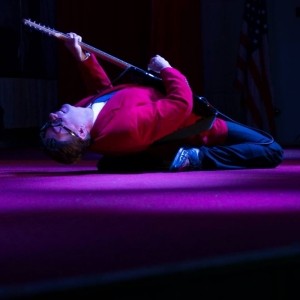 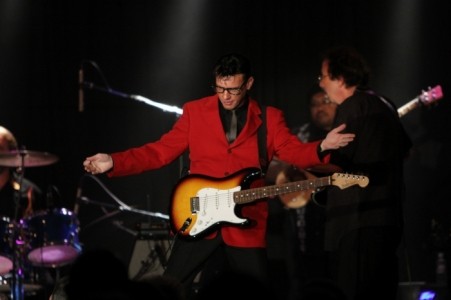 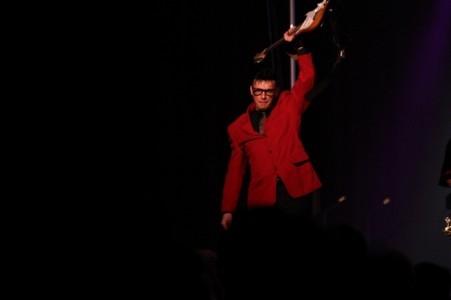 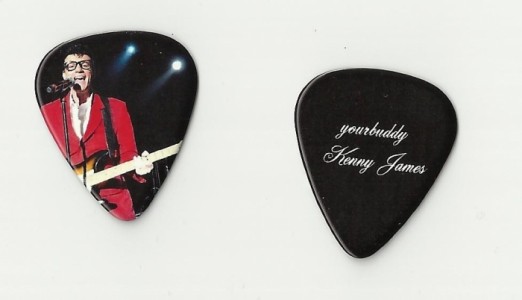 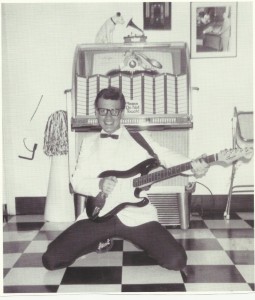 Share this Page:
Click here to view all of our Buddy Holly Tribute Acts on Entertainers Worldwide
Browse all Entertainment Hire options!