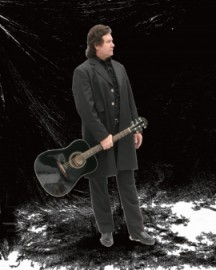 I have been a fan of Johnny Cash since I was about 8 years old. He and Elvis were my first two musical influences. I always felt Johnny's music got better over the years. Cash’s songs addressed a lot of issues common to a lot of people, whether it was sensitive social issues or just some slice of life the average person could relate to.
Having firsthand knowledge of others who were doing tributes and, wanting to honor my musical hero, I decided to start performing "Train of Love: A Tribute to Johnny Cash."
I wanted to make my show a little different and unique by portraying Johnny Cas ... h in the first person, rather than just standing there singing the songs. Like an actor in a play I literally become my character, in this case Johnny Cash, from the moment I walk onstage until the end of the show.
Among the 34 songs included in the tribute are such Cash classics as: “A Boy Named Sue”, “Sunday Morning Coming Down”, “I Walk The Line”, “Ring Of Fire”, “Folsom Prison Blues” and “Hurt”.
In June 2003, we took the “Train of Love” tribute to Nashville for two performances. Cash’s brother and sister attended the show and were very complimentary afterward.
Tommy Cash stated, "My Brother would be proud". Joanne Cash Yates commented,
"It's a wonderful show, I would recommend it to anyone" and “you don’t impersonate my brother, you pay tribute to him with honor”
His brother and sister enjoying the show was a great boost to our confidence. We came away from Nashville thinking we must be doing something right.
“Train of Love” sprang from my appreciation and love, not only for the music of Johnny Cash, but for the man himself. A champion of the underdog, a voice for those who often have none, an "outlaw" before it became fashionable. If you come away from this presentation with a better understanding of who Johnny Cash is, I will have succeeded in my vision for this endeavor.
Enjoy the Ride - Terry Lee Goffee 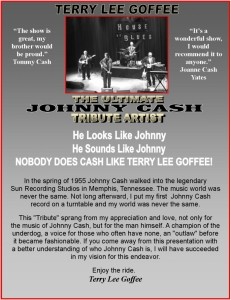 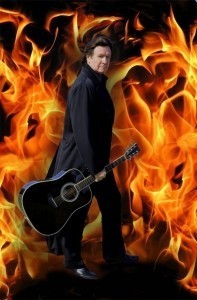