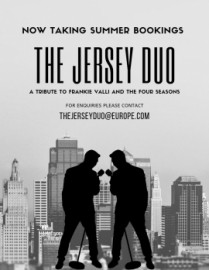 The Jersey Duo, a tribute to Frankie Valli & The Four Seasons
Request a Quote
Share this Page:
Profile Views: 130
Report this profile

The Jersey Duo, a magical tribute to Frankie Valli & The Four Seasons. Our show consists of some of the best of the 50s & 60s Rock N Roll.
A family friendly 1 hour show showcasing some of The Jersey Boys most listened to songs.
Uplifting and full of energy with choreography, our show is the ultimate feel good entertainment for your venue/event.

Sh Boom
Blue Moon
Still of the night
Teenager in love
Gambling man
Breaking up is hard to do
Pretty woman
Runaround Sue
Hit the road Jack
Johnny B Goode
Cant take my eyes off you
December 63 (oh what a night)
Do you love me
We have also added a few of current songs into our set and can also take special requests to learn your favourite song prior to your event!

Codie & Fran both aged 26 met in Greece in 2017 both touring the Rhodes island, Kos & Turkey as The Jersey Boys, spending a total of 14 months (2 seasons) in a group of four had decided to move to Marbella in 2019 and create their very own magical show with just the two of them as a duo! The Jersey Duo, both having experience in performing at exclusive resorts and 5* hotels we are sure to know how to work every kind of audience, with performances of up to 1000 people we are confident in saying we have great audience interaction experience.

Request a Quote
Share this Page:
Click here to view all of our Tribute Act Groups on Entertainers Worldwide
Browse all Entertainment Hire options!