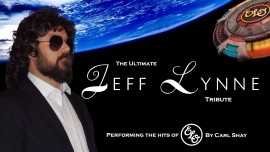 (no reviews)5.0
Country: United Kingdom
Based In: Leeds, Yorkshire and the Humber
Performs: Worldwide
From: Contact

Carl Shay has got the tone the sound and the look of Jeff Lynne and he is as close as you can get to the real thing. So sit back or get up and dance to the most authentic Jeff Lynne tribute act on the scene singing all the hits from E.L.O. ​
: 0798540XXXX Click here to reveal
full number

Jeff Lynne Tribute
Carl has been planning to a tribute show for many years now, but due to a high demand for his act on the music scene he was involved in the opportunity and the time were hard to come by.
​Two years ago Carl decided to cut back his diary to make room in 2017 to start the show he has been so desperate to do.
Jeff Lynne (E.L.O) wasn't the first act Carl began planning ( there were a few more ) David Bowie, Duran Duran, Josh Groban to name a few but thankfully he settled on the act that absolutely suits his voice and his music taste.
​To make the transition from a ... general artist to a tribute act defiantly takes a skill and a lot of rehearsing but Carl has spent the better part of 12 months doing just that. Carl has got the tone the sound the look and is as close as you can get to the real thing.
So sit back or get up and dance to the most authentic Jeff Lynne tribute act on the scene singing all the hits from E.L.O.

Carl Shay
Carl’s singing career began in 1990 when he learned to play the guitar so that he could indulge his dream of becoming a singer of all different types of music.
His “public performances” began in his late teens, during a 9-year stint with the army based in Germany - and it was there that he learned how to read an audience, how to choose songs that would appeal to them, and improved stagecraft in general.
On his return to the UK he immediately used those skills to good effect with the British music enthusiasts, and found himself concentrating more on the ‘Country ... ’ styles that had proved so successful in Germany. He’s quite a perfectionist, so his understanding of what is needed and wanted has been a corner stone of his success over the years and is one of the reasons for his rapid elevation to the ranks of “much sought-after” artistes on the circuit today.
He has a warm personality which in turn rubs off on his audiences, and a sure sign that ”Shay Mania” is on the way and that the next few years are going to be very busy for this likeable young man.
Welcome then to a vibrant, strong evening of entertainment with this exciting purveyor of great dance-able music and you can be sure of going home fully ‘danced-out’ and entertained after an evening with Carl Shay.

Share this Page:
Click here to view more Tribute Acts in Yorkshire and the Humber
Browse all Entertainment Hire options!