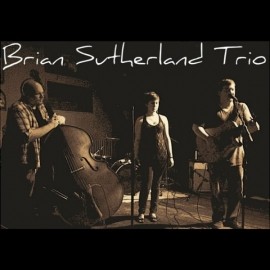 (no reviews)5.0
Country: United States
Based In: Florida
Performs: Nationwide
From: Contact

The band has been in its current lineup since early 2011, and has progressed together as friends, musicians and a collective since that time. Based in Florida, they are available to perform at Parties, Weddings, Corporate events & more.
Request a Quote
Share this Page:
Profile Views: 565
Report this profile

The Brian Sutherland Trio, just as it sounds consists of three individuals who became friends while attending Florida Southern College (FSC) in Lakeland, Florida. The band has been in its current lineup since early 2011, and has progressed together as friends, musicians and a collective since that time. The band has a unique ability to craft great pop/folk/rock songs, as evidenced by their first original recording, Brian Sutherland Trio. Among the more traditional instruments, the band also uses cello, double bass, ukulele, and even the odd kazoo to round out their sound.
A little about ... the members of BST:
Brian Sutherland attended Cypress Lake School for the Arts in Fort Myers, Florida. He also attended FSC as a cello major, while also playing guitar for the FSC jazz band. In addition he always continued to write music for himself and a college band he was in. Brian has performed as a solo act, as part of a duet and trio, and has also performed in bands and ensembles in the Lakeland area over the past few years. As a source of income, Brian is a regular artist at the many music venues in Lakeland and its outlying areas playing cover and original songs. The list of cover songs he performs is without question his driving force in regards to his influences. Ray LaMontagne , Damien Rice and Jason Mraz all come to mind when listening to the original music of BST. Brian successfully graduated from FSC in December 2011 with a degree in cello performance.
Adrienne Kneebone is from Port Charlotte, Florida, close by to Fort Myers, and is youngest member of BST. Adrienne grew up with diverse musical interests, and was always involved in school and church choruses and choirs. She possesses a distinctive quality in her voice that is reminiscent of 60’s and early 70’s R & B singers, and also some current British R & B and soul singers. Although Adrienne’s musical interests are eclectic, her love of Pink, Norah Jones, and Lauryn Hill always remain a huge inspiration to her. Adrienne is a self professed people person. She recently graduated from FSC as a psychology major, and although she is unclear on how she can meld her degree and music into a career, Adrienne is currently fully committed to BST and its future.
Zachary Rogers graduated from Blake High School for the Arts in Tampa Florida. He enrolled as a bass major at FSC and plans to continue the pursuit for his degree in music. Zach plays both the 5 string stand up double bass, and an electric 6 string. Although Zach, like his band mates, has eclectic taste when it comes to listening to music, he cites a few different bass players that have been an influence for both stand up and electric bass. The incomparable jazz artist Charles Mingus, and also Edgar Meyer from the famous Bela Fleck and the Flecktones remain his pre-dominant jazz influences. Ty Zamora from Alien Ant Farm inspired Zach to pick up the same 6 string electric bass. Zach’s solid rhythm anchors BST but don’t be surprised to hear him take a distinctive solo every now and again. Although Zach can see himself as part of a full time orchestra and possible off shoot projects down the road, he, like all the BST members are in this for the long haul.
How did the band come together? Brian and Zach came by each other as high school seniors at an FSC talent weekend and showcase. They soon worked together in both the FSC jazz band and orchestra before playing together in BST. The two subsequently soon found Adrienne by way of an open mic night at the Fair Trade Coffee House on the FSC campus. Adrienne’s first song with the band was the jazz standard, Summer Time. It was clear that there was a match, as evidenced by the future beautiful harmonies Brian and Adrienne create. Add to that Zach’s presence and solid playing and you have the fantastic Brian Sutherland Trio.
The band continually writes. Their first self produced record was released March 28, 2012 by 50 Into 1 Records. 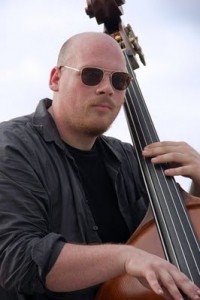 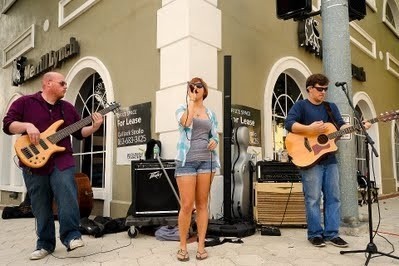 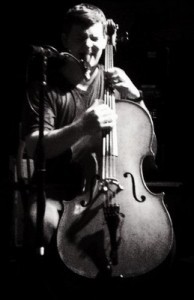 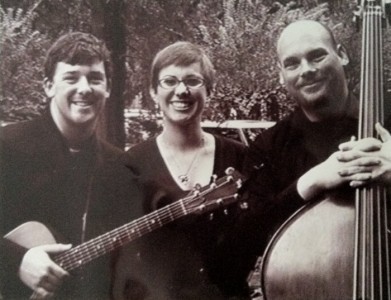 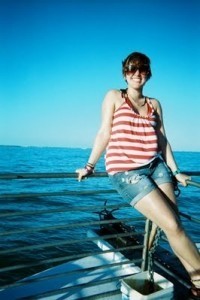