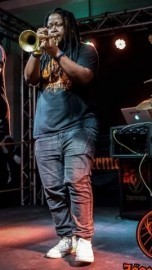 (no reviews)5.0
Country: South Africa
Based In: Gauteng
Performs: Worldwide
From: R3000

Jack plays trumpet he has been playing trumpet for 16 years now. I played in various bands, i play almost all genres of music. I played with Jazz Big bands, orchestras, pop bands arc.... I'm a good sight reader and my soloing is also good..
: 083698XXXX Click here to reveal
full number

When contacting this member, please state that you are viewing their Entertainers Worldwide profile.
Request a Quote
Share this Page:
Profile Views: 105
Report this profile

I'm a strong player I have range, I can play on higher register. I play Jazz in all the gigs I'm doing, pop, soul, Latin and classic.

NTSIKELELO ”JACK” MCWABE
BIO
Ntsikelelo “Jack” Mcwabe was born in Daveyton, Johannesburg in 1989 and currently resides in Sunnyside, Pretoria. He started his musical journey as a choir boy at his local primary school where he also picked up the recorder flute. During his teenage years he started to study music as a result of the Khulanathi Community Music Project that engaged in civic music education courses in his hometown. Jack was subsequently introduced to the trumpet as his first instrument and he began formal lessons in jazz performance with John Sotlella a graduate of the Musi ... c Academy of Gauteng and founder of the Khulanathi Community Music Project. Jack set aside his love for soccer in favour of music when he undertook formal graded examinations in Music with the external examining body, the Associated Board of the Royal School of Music (ABRSM) and by 2007 he had successfully completed his Grade 4 in Classical Trumpet and Music Theory.
By 2008, Jack put his formal music training on hold to complete his Matric Senior Certificate at Unity Secondary School in Daveyton, Gauteng. It was during this period when he was no longer under the constraints of the classical curriculum of the examining bodies that Jack began his independent studies/self-teaching in Jazz by ear and experimental improvisation, a skill which he now has mastery over.
Key influences during this period of personal musical growth was another hometown affiliate and jazz icon from Gauteng, Johnny Mekoa, whom Jack credits as the mentor who taught him the virtue of giving back his musical talent to the local community. Other role models were the renowned South African Jazz horn players, Hugh Masakela and Feya Faku who inspired Jack to focus on generating a unique musical tone colour and breath control on his trumpet. The American trumpeter Clifford Brown is also one of Jack’s musical icons, and he hopes to achieve similar success in his career as a jazz musician. Jack started studying at the Tshwane University of Technology in 2010 for a diploma in Jazz and Popular Music where he completed 3 years of full time study. Jack is currently a freelance musician, has played with the Gauteng jazz orchestra directed by Jonny Mekoa, new jazz ensemble in Gauteng, the Mkizwana Ensemble that he co-founded in October 2014 and they just released their debut album AFRICAN SKIES. Many of the members of the Mkizwana Ensemble, UP Jazz ensemble and through this affiliation; Jack also began participating in the work of the University of Pretoria Jazz ensemble for the Principal’s Concert in 2015, he has also performed at Moretel festival, joy of jazz, Moshito festivel and also performed at The Orbit. Last year he toured Europe with the MIAGI (MUSIC IS A GREAT INVESTMENT) as a Principal trumpet.