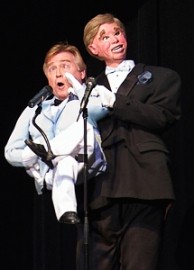 (no reviews)5.0
Country: United States
Based In: Branson, Missouri
Performs: Nationwide
From: Contact

Jim Barber’s refreshingly unique approach to the art of ventriloquism and his incredible vocal skills have earned him the reputation as one of the most original talents performing today.
Request a Quote
Share this Page:
Profile Views: 1131
Report this profile

Audiences everywhere are singing the praises of Jim Barber, a versatile ventriloquist who is turning heads with his unforgettable show. Unique and inventive, Jim Barber will serenade your audience with his remarkable repertoire of voices, sound effects and sight gags, including his six-foot, singing sidekick Seville.
Winner of numerous awards, including the National Association of Campus Activities Association's Comedy Entertainer of the Year, International Ventriloquist of the Year, and Showtime the Movie Channel's Funniest Person in Tennessee, Jim is no dummy. He never gives a wooden perf ... ormance because he knows the business of being funny.
What makes Jim's performances stand out from the ordinary is his clever incorporation of traditional theatrical and magical principals to create an unforgettable evening of ventriloquism.
Ever the master of the moment, Jim Barber tickles the fancy of audiences who applaud his ability to adapt and ad-lib, turning natural sounds into "supernatural" sounds.

Jim Barber’s refreshingly unique approach to the art of ventriloquism and his incredible vocal skills have earned him the reputation as one of the most original talents performing today. From the surprise entrance of ‘Barber and Seville’ to the moving vocals of Les Miserable your audience will be completely entertained by Jim’s unique talent and charm! He presents a show unlike any your group has witnessed before, with ingenious comical characters, toetapping music and hilarious audience participation!
After a smashing three year run at the Glen Campbell Goodtime Show in Branson, Mi ... ssouri, Jim went on to be the featured comedian for the Osmond Family Theater and eventually his very own venue, the Hamner Barber Theater, with illusionists The Hamners. In 2013 the artists celebrated their 10th and final season of their popular magical variety show. Jim is now dedicating most of his time as a destination marketing professional as well as performing his award winning act for corporate events and cruises.
TV credits include: “Late Show with David Letterman,” TNN’s “Prime Time Country”, “Music City Tonight with Crook & Chase” and “The Statler Brothers.” A&E’s “Caroline’s Comedy Hour” and “Comedy on the Road.” The syndicated “Vicki! The Vicki Lawrence Show,” Fox TV’s “Comic Strip Live,” and as a national co-host of the Jerry Lewis MDA Telethon.
Among Jim’s numerous tours, he has had the pleasure of performing on stage with such well known
entertainers as Glen Campbell, Yakov Smirnoff, Tony Orlando, Roy Clark, Reba McEntire, Eddie Rabbitt, Crystal Gale, Debbie Reynolds, Vince Gill, Captain and Tennille, Roger Miller, Louise Mandrell, The Bellamy Brothers, The Temptations, The Osmonds, Wayne Newton, Famous People Players, Little Anthony & The Imperials and many others.
Before graduating college, at the University of Minnesota, Jim combined his theatrical, comedic, musical, and production skills to create a unique Minneapolis based daily television show which he produced and co-hosted for nearly two-years. This led to the development of his one-man comedy show which he has performed at approximately 2,000 colleges and universities nationwide.
In addition to appearances at various comedy clubs, hotels, conventions, corporate and industrial shows and fairs, he was featured for two seasons on the General Jackson Showboat at Opryland U.S.A. in Nashville. His Armed Forces tours have taken him to every airforce base across the United States and to NATO bases throughout the Mediterranean.
Jim has appeared in fifteen foreign countries and has now performed in every state in the U.S. except Hawaii, but his grass skirt is packed and ready to go!
Jim has received numerous honors including the Merlin Award for “Ventriloquist of the Year” by the International Magicians Society, “Campus Comedy Entertainer of the Year” by the National Association of Campus Activities as well as earning the Association’s nomination for Entertainer of the Year five years in a row! He has also garnered the coveted “International Ventriloquist of the Year” and Showtime The Movie Channel named him the “Funniest Person
in Tennessee.” 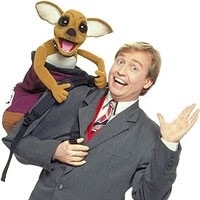 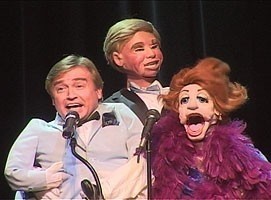 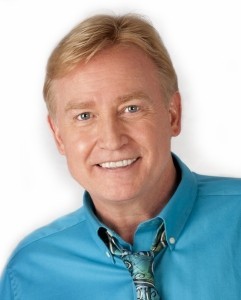