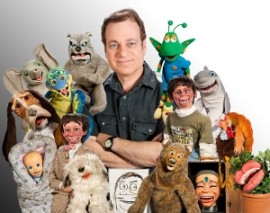 (no reviews)5.0
Country: United States
Based In: San Diego, California
Performs: Worldwide
From: $250

Joe Gandelman - Family Entertainer does shows for ALL ages and ALL occasions. He performs at fairs, festivals, corporate events, private parties, schools and has done two special national tours of schools, the last of which included schools in Canada.
Request a Quote
Share this Page:
Profile Views: 1822
Report this profile

Joe Gandelman spent nearly 20 years in the newspaper business before he decided to dash it all and become a full-time ventriloquist — a change that has him performing in the U.S. and in Canada. He performs at fairs, festivals, schools, corporate events, libraries and has been on television.
Gandelman tried ventriloquism as a child in Connecticut. He was in theater musical production in high school at Amity Regional High School, in Woodbridge, CT. While attending Colgate University he did a comedy piano playing, singing act from time to time. After getting his B.A from Colgate and a Master ... s in Journalism from Northwestern University he began a newspaper career that included freelance work in India, Spain, Cypress and Bangladesh. He wrote for papers such as the Chicago Daily News, contributed to Newsweek and National Public Radio and was a Special Correspondent for the Christian Science Monitor in Madrid.
He returned to the United States to become a staff reporter on the Wichita Eagle-Beacon and the San Diego Union. In the 1980s, he did ventriloquism again to relieve stress — perfecting his technique by carefully studying and constantly practicing materials in a mail-order ventriloquism course.
Gandelman went full-time due to the encouragement of legendary ventriloquist Jimmy Nelson, star of the classic Nestles commercials. Nelson critiqued one of Gandelman’s tapes and, in a meeting with Gandelman in Florida, suggested he should think about “going pro.” A newspaper colleague soon dropped dead of a heart attack and Gandelman got into a near fatal car accident. He decided “life was too short” and began pursuing a childhood dream.
In November 1990, he left his job as a San Diego Union staff writer after nearly 10 years to do ventriloquism full-time. He had few bookings lined up and received little help from agents. A few years after that, he was included in The Great Ventriloquists collector’s cards set and performing at fairs and other events all over the country.
He opened for national musical groups such as The Eels at the Hollywood Music Box, performed at Camp Pendleton before a speech by former Pres. Ronald Reagan and was seen on ABC World News Tonight with Peter Jennings. He was on NBC’s hidden camera show “Spy TV” and taught comedian Margaret Cho how to do ventriloquism in an episode of her VHI reality show, “The Cho Show.” He has done two special North American school tours, performed at clubs, the San Diego Zoo, fairs and celebrity parties.
He and his wooden dummies and cartoon-like latex puppets have also appeared in family variety shows at big stage venues such as San Francisco s Palace of Fine Arts, San Jose Center for the Performing Arts, Oakland’ s Paramount Theater, the Anaheim Convention Center and on old vaudeville stages.
His act features a BIG cast of characters, comedy, lots of audience interaction. His large cast of state-of-the-art wooden and “soft” puppet characters includes John Raven, a wise-cracking state-of-the-art wooden dummy with striking facial animations who frustrates him at every turn.
After several years of doing shows, Joe added walk around — using his very BIG cast of characters, which allowed him to do long engagements, rotating his cast of characters by visiting groups of people for short bits. At a 2015 adult Halloween party he used 9 characters in two and a half hours.
Gandelman wrote the highly acclaimed now-out-of-print Tips from a Pro book and tape set for ventriloquists. He later published Super-Simplified Ventriloquism, a book on his system for learning ventriloquism quickly — which is now available as a highly Kindle rated eBook on Amazon.com.
He has been a highly popular performer at fairs and festivals throughout the United States -- drawing big crowds and repeat viewers for his family show with his big cast of characters. At some fairs and festivals he will visit local convalescent homes to take the show to seniors who can't leave their facilities. He can adapt his show to a fair or festival's theme at no extra cost. At some fairs and festivals, he will also do strolling ventriloquism with one of his characters before each scheduled show.
Joe Gandelman also has been teaching ventriloquism to young people steadily in special workshops or as a requested segment in his show since 1991. He has become known for his workshops where people can learn ventriloquism and puppetry skills quickly and become fired up about learning more. One observer called him "the unsung Johnny Appleseed of ventriloquism." An Irvine corporation contracted Joe Gandelman to do a special four hour workshop, show, lecture on ventriloquism, puppetry, comedy and goal setting in performance for its sales staff.
His school assemblies have been acclaimed for his Learning Through Laughter technique which uses a big cast of characters generating laughs to communicate and help students retain serious information on themes such as anti-drug, anti-tobacco, character, respect, no teasing/no bullying, diversity and pro-reading. Each of all his school assemblies also contains a short how -to-do-ventriloquism segment, as part of his effort to help keep the art alive. 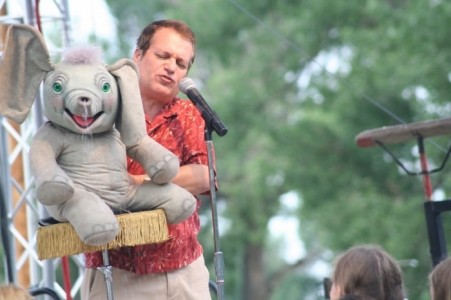 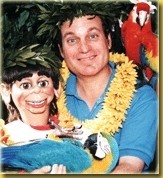 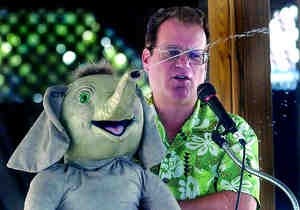 Joe has opened for national music groups, entertained on Navy Ships, performed at Camp Pendleton before a speech by former President Ronald Reagan and was seen on ABC World News Tonight with Peter Jennings. Joe and his dummy, John Raven, have appeared on NBC's SPY TV (see the video below). Joe also taught comedian Margaret Cho how to do ventriloquism in a segment on her VH1 reality show "The Cho Show."