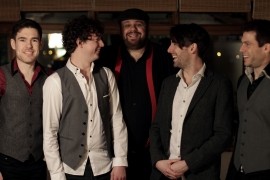 When contacting this member, please state that you are viewing their Entertainers Worldwide profile.
Request a Quote
Share this Page:
Profile Views: 2337
Report this profile

Mister Kanish have been together since 2006. We provide the kind of entertainment that leaves everyone from young kids to senior citizens with huge grins on their faces, feverishly demanding “MORE!!!” As 5 friends with so many shared experiences we have crazy amounts of fun playing together, and our audiences can’t help but feel part of the action.
We’ve provided the soundtrack to friendships old and new.
We’ve played gentle acoustic sets at 3pm surrounded by serene Welsh hills. We’ve played 21st birthday parties where the host has drunkenly demanded an extra set at 3am, and t ... he stage is drenched in booze.
We’ve played countless first dances, each one a special memory. Those when the bride and groom have secretly rehearsed for weeks, performing majestically as one with the band, leaving everyone astounded – fathers clasping hands and mothers crying tears of joy. Then there’s those when the panick-stricken groom beckons all his mates to join him on stage, just after the intro.
We’ve played Sunday afternoon river cruises on the Thames, flanked by tranquil Oxfordshire countryside. We’ve played Saturday nights in pubs where the revelry is so intense, and so much flesh is visible on the dance floor, that bouncers have had to intervene.
All the while the band plays on. Mister Kanish always deliver, whatever the time or place.
The Mister Kanish lineup of vocals, dual guitars, bass and drums gives us a pure, live, energetic, rocking sound. Or if you prefer the line-up of double bass, acoustic guitars, vocals, mandolin, violin and drums you have a more Mumford and Sons crossed with Rihanna style. What you don’t get from Mister Kanish is anything fake – no cheesy strings, no synth brass, and never any pre-recorded backing tracks. What you see is what you get – highly talented musicians using premium level instruments and equipment, covering songs from the 50s to today with their own style and sound. Even if we play a song note for note, down to the last semiquaver in the last bar of the guitar solo, we will always sound like Mister Kanish.

Mister Kanish - Wedding Band - Winchester, South East Event Location: The Savoy Event Type: Wedding 23rd March 2019
You guys were incredible and absolutely made our evening. Everyone is commenting today how great you guys were so thank you so much!!! We could not have asked for a better band, you guys nailed it. Every set was amazing! You guys are by far the best band we have ever heard so again we cannot thank you enough!
Reviewed by: Andy
Mister Kanish - Wedding Band - Winchester, South East Event Location: London Event Type: Wedding 19th May 2018
I wanted to say a HUGE thank you to you and the band for being so totally amazing at our wedding. I’ve had nothing but positive comments from all the guests and you certainly kept the dance floor full right until the end. In fact lots of people told me that they thought you were the best wedding band they’d ever heard and that they could have carried on dancing to your music for hours! Alexander and I felt the same. It was so nice to have so many people dancing including the older generation. You really made the party! Thank you ever so much.
Reviewed by: Rebecca and Alexander

We have performed at over 40 weddings a year since 2006 giving us a wealth of experience that is unmatched. In 2014 we were invited to France to perform on The Cover (basically France's answer to The Voice). We came up against acts from all over the world and were voted number 1 by the 1million people who viewed it. We have also played corporate events and dinners for companies such as, Holland and Barrett, White Stuff, Microsoft, Merryl Lynch and more.