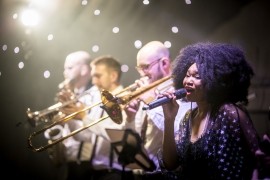 In over 11 years of performing at weddings, events and corporate functions, Pandora's Jukebox have never failed to wow a crowd or fill a dance floor. With unrivalled service and quality, they have built a reputation as one of the best party bands in London.
With one of the largest repertoires in the business, all your guiltiest pleasures are covered - whether that be from pop queens Taylor Swift or The Spice Girls - maybe some old school Motown from the likes of Marvin Gaye, Aretha Franklin - or perhaps Funk, Soul and Disco is your thing in which case Stevie Wonder, Michael Jackson & Earth ... Wind and Fire hits are lined up ready.
There's even a healthy chunk of EDM, drum & bass or dubstep for the clubbing fans. With shows and setlists tailored to every client, all tastes are catered for. 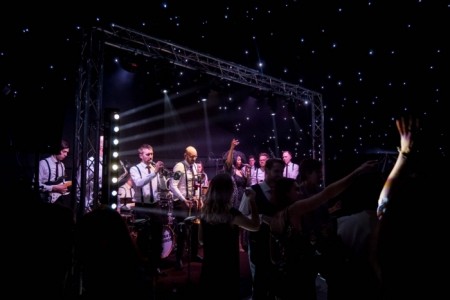 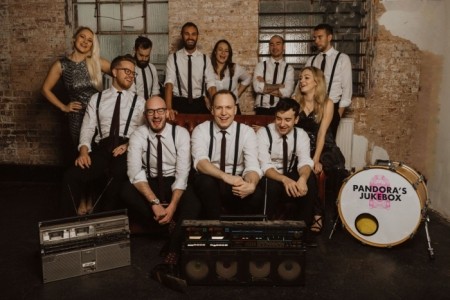 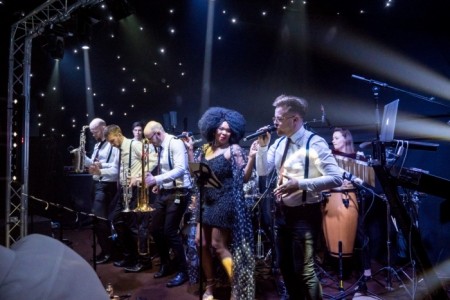 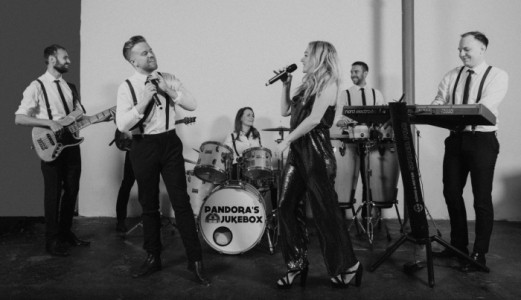 Pandora's Jukebox - Wedding Band - East Dulwich, London Event Location: London Event Type: Wedding 29th February 2020
A quick email to say a HUGE thank you for the most fabulous wedding performance on Saturday. From the gorgeous piano during our ceremony to banger after banger on the dance floor, you really were the wedding band of our dreams. We’ve had tonnes of messages from our friends and family saying how fabulous you were. Thank you for playing and performing all of our favourite songs so perfectly and for making our wedding one to remember. The garage medley was a particular highlight! All the best Kate and Ali x
Reviewed by: Kate and Ali
Pandora's Jukebox - Wedding Band - East Dulwich, London Event Location: Fenstanton Event Type: Wedding 11th January 2020
The best wedding band we could ever ask for. They kept the dance floor full for the entire night and played a perfect selection of songs. From the start, they were clear on their requirements, and were extremely professional and easy to deal with. They played songs we requested, and performed our first dance song just as we envisioned. Well and truly worth every penny. Thank you for making our big day even more incredible than we could have imagined. Rosie & Luke
Reviewed by: Rosie
Pandora's Jukebox - Wedding Band - East Dulwich, London Event Location: London Event Type: Wedding 22nd December 2019
Pandora's Jukebox played at our wedding in London and they were absolutely amazing - they really made the party! Dougie was really easy to work with and they really listened to us regarding the type of music we wanted for the crowd. Definitely book them - you won't regret it!
Reviewed by: Katie

Pandora's Jukebox perform at 25+ Annual private events including weddings, corporate functions and parties.
Being graduates of the prestigious London Guildhall School of Music and Royal Academy, the band is comprised of the most accomplished and in-demand professional musicians in the country. The likes of which have graced stages with All Saints, Kwabs, Gareth Malone, Kelis, Daley, Shift K3Y, Maverick Sabre - performed on The X Factor, BBC Proms & Later with Jools Holland and at such locations as Glastonbury Festival, The Royal Albert Hall & Wembley Stadium as well as manning the orchestra ... pit on such West End shows as Book of Mormon, Wicked, Phantom of the Opera and Les Miserables.

Some of the venues that we have performed in and clients that we have worked with are listed below:
The Sky Garden
Aynhoe Park
Kew Gardens
The Underglobe
Kensington Palace
Blenheim Palace
Gibson Hall
Rexel UK
Accenture
Wyndham Grand Chealsea
AELTC (Wimbledon)
One Great George Street
Devonshire Terrace
St. Ermin's Hotel
Addington Palace
Botley's Mansion

Our equipment is PAT tested on an annual basis and we have full Public Liability Insurance to the value of £10m.