You are contacting Corey Alexander 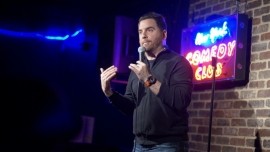 (no reviews)5.0
Country: United States
Based In: Philadelphia, Pennsylvania
Performs: Nationwide
From: $300

Corey Alexander is a comedian, actor, writer, and voiceover actor. From Philadelphia, Corey has traveled all over the United States and Internationally to bring laughs to many audiences. He has performed from New York Comedy Club all the way to the Comedy Store in LA.
Request a Quote
Share this Page:
Profile Views: 2177
✖