You are contacting Jolly Roger 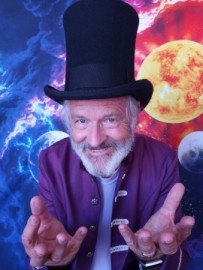 (no reviews)5.0
Country: United States
Based In: Phoenix, Arizona
Performs: Worldwide
From: Contact

Jolly Roger magician(Roger Blakiston) is originally from England. He is now based in Phoenix, Arizona. He will delight and amaze your audiences, both young and old, with his magic and comedy. He is professional, versatile, funny, clever and charismatic.
: 602485XXXX Click here to reveal
full number