You are contacting Perfectly Frank 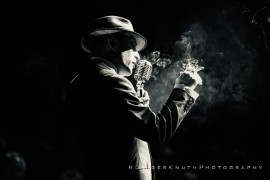 (1 Review)5.0
Country: United Kingdom
Based In: North of England
Performs: Worldwide
From: £600

David Knopov has been performing his Sinatra act “Perfectly Frank” for over 30 years to a global audience at international jazz festivals. David had the honour of playing for HMR Queen Elizabeth during her Golden Jubilee and King Constantine for his 70th party.
Request a Quote
Share this Page:
✖